Early Double Monasteries A Paper read before the Heretics' Society on December 6th, 1914 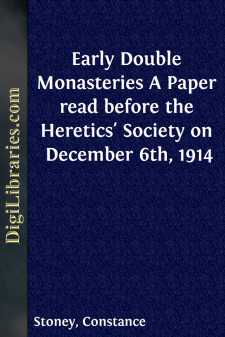 The system of double monasteries, or monasteries for both men and women, is as old as that of Christian monasticism itself, though the phrase "monasteria duplicia" dates from about the C6. The term was also sometimes applied to twin monasteries for men; Bede uses it in this sense with reference to Wearmouth and Yarrow, while he generally speaks of a double monastery as "monasterium virginum."

The use of the word "double" is important. The monastery was not mixed; men and women did not live or work together, and in many cases did not use the same Church; and though the chief feature of the system was association, there was in reality very little, when compared with the amount of separation. In time, the details of organisation varied, such, for example, as whether an abbot or an abbess ruled the whole monastery, though it was generally the latter. Details of the rule of the community naturally altered at different times and in different places, but the essential character remained the same.

As to the object of such an arrangement, opinions differ. Some have regarded it as a sort of moral experiment; others have seen in it only the natural outcome of the necessity for having priests close at hand to celebrate Mass, hear confessions and minister in general to the spiritual needs of the nuns. There is, too, the practical side of the plan—namely, that each side of the community was economically dependant on the other, as will be seen later. However this may be, the practice of placing the two together under one head seems to be as ancient as monasticism itself.

The double monastery in its simplest form was that organisation said to have been founded in the C4 by S. Pachomius, an Egyptian monk. He settled with a number of men, who had consecrated themselves to the spiritual life, at Tabenna, by the side of the Nile. About the same time, his sister Mary went to the opposite bank of the Nile, and began to gather round her women disciples.

This settlement soon became a proper nunnery under the control of the superior of the monks, who delegated elderly men to care for its discipline. With the exception of regulations concerning dress, both monks and nuns observed the same rule which S. Pachomius wrote for them. It was very simple. There were to be twelve prayers said during the day, twelve at twilight, twelve at night, and a psalm at each meal. Mass was celebrated on Saturday and Sunday. Meals were to be eaten all together and the amount of food was unlimited. A monk could eat or fast as he pleased, but the more he ate, the more work must he do. They were to sleep three in a cell. No formal vows were to be taken, but the period of probation before entry into the community, was to be three years. The men provided the food, and did the rough work for the women, building their dwellings, etc., while the women made clothes for the men. When a nun died her companions brought her body to the river bank and then retired; presently some monks fetched away the body, rowed back across the Nile, and buried it in their cemetery.

That the communities of S. Basil and his sister Macrina (also in the C4) were of this type, may be seen from the rule of S. Basil. The communities, like those of Pachomius, were on opposite banks of a river—in this case, the Iris; and Macrina's nunnery is supposed to have been in the village of Annesi, near Neo-Caesarea, and founded 357 A.D....