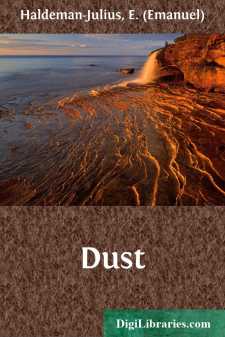 I. THE DUST IS STIRRED

DUST was piled in thick, velvety folds on the weeds and grass of the open Kansas prairie; it lay, a thin veil on the scrawny black horses and the sharp-boned cow picketed near a covered wagon; it showered to the ground in little clouds as Mrs. Wade, a tall, spare woman, moved about a camp-fire, preparing supper in a sizzling skillet, huge iron kettle and blackened coffee-pot.

Her husband, pale and gaunt, the shadow of death in his weary face and the droop of his body, sat leaning against one of the wagon wheels trying to quiet a wailing, emaciated year-old baby while little tow-headed Nellie, a vigorous child of seven, frolicked undaunted by the August heat.

"Does beat all how she kin do it," thought Wade, listlessly.

"Ma," she shouted suddenly, in her shrill, strident treble, "I see Martin comin'."

The mother made no answer until the strapping, fourteen-year-old boy, tall and powerful for his age, had deposited his bucket of water at her side. As he drew the back of a tanned muscular hand across his dripping forehead she asked shortly:

"What kept you so long?"

"The creek's near dry. I had to follow it half a mile to find anything fit to drink. This ain't no time of year to start farmin'," he added, glum and sullen.

"I s'pose you know more'n your father and mother," suggested Wade.

"I know who'll have to do all the work," the boy retorted, bitterness and rebellion in his tone.

"Oh, quit your arguin'," commanded the mother. "We got enough to do to move nearer that water tonight, without wastin' time talkin'. Supper's ready."

Martin and Nellie sat down beside the red-and-white-checkered cloth spread on the ground, and Wade, after passing the still fretting baby to his wife, took his place with them.

"Seems like he gets thinner every day," he commented, anxiously.

With a swift gesture of fierce tenderness, Mrs. Wade gathered little Benny to her. "Oh, God!" she gasped. "I know I'm goin' to lose him. That cow's milk don't set right on his stomach."

"It won't set any better after old Brindle fills up on this dust," observed Martin, belligerency in his brassy voice.

"That'll do," came sharply from his father. "I don't think this is paradise no more'n you do, but we wouldn't be the first who've come with nothing but a team and made a living. You mark what I tell you, Martin, land ain't always goin' to be had so cheap and I won't be living this time another year. Before I die, I'm goin' to see your mother and you children settled. Some day, when you've got a fine farm here, you'll see the sense of what I'm doin' now and thank me for it."

The boy's cold, blue eyes became the color of ice, as he retorted: "If I ever make a farm out o' this dust, I'll sure 'ave earned it."

"I guess your mother'll be doin' her share of that, all right. And don't you forget it."

As he intoned in even accents, Wade's eyes, so deep in their somber sockets, dwelt with a strange, wistful compassion on his faded wife. The rays of the setting sun brought out the drabness of her. Already, at thirty-five, grey streaked the scanty, dull hair, wrinkles lined the worn olive-brown face, and the tendons of the thin neck stood out....