Due West or Round the World in Ten Months 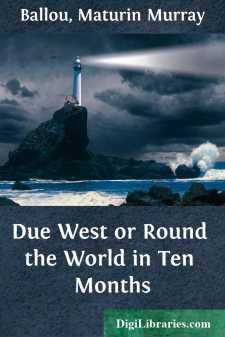 On the morning of September 16, 1882, four individuals, two of whom were ladies and two gentlemen, comparative strangers to each other, met at the Fitchburg depot in Boston, drawn together by the common purpose of a trip round the world. Adding the conductor, Mr. Gno. Dattari, an intelligent and experienced courier, the little party numbered five persons. The latter individual is attached to the traveling agency of Thomas Cook & Son, London, the house undertaking, for the sum of two thousand dollars each, to pay all transportation and board bills in accordance with a very comprehensive itinerary. This embraced the passage across the continent of America and the Pacific Ocean to Japan, with a month of residence and travel in that country; thence to China and up the Pearl River to Canton; a week in Hong Kong; a thousand-mile voyage down the China Sea to the chief ports of the Malacca Straits; across the Indian Ocean to the Island of Ceylon, with a week for excursions therein; thence to India, with a liberal exploration of its principal cities, including a visit to the Himalayas in the extreme north; through the Sea of Arabia, the Straits of Babelmandeb, and the Red Sea to Egypt, Cairo, and Alexandria; through the Suez Canal and the Mediterranean to Italy, Malta, Gibraltar, France, and England. A reasonable length of time was allowed for each section of the route, including a voyage across the Atlantic to the starting-point.

Any divergence from the prescribed route was to be at an additional charge, according to expenses incurred. The money was paid at the outset, and the agreement on both sides fulfilled to the entire satisfaction of all concerned. Thus much it has seemed well to premise for the information of the reader who proposes to follow our course due west, as presented in these pen-and-ink sketches of many lands. It should also be mentioned that the season of the year had been judiciously chosen, so as to bring us into each country at the most favorable period for its healthful and agreeable enjoyment, a calculation which is imperative for any one contemplating a journey of this character. Otherwise, the intense heat of the tropics, as well as the Arctic chills of the north, may render such a trip a hardship rather than a season of pleasure.

The first day's experience served to acquaint the little party with each other, and no possible association can effect this so rapidly as traveling together, where individuals necessarily become inseparable, and where fixed traits of character must inevitably exhibit themselves. Mr. M—— and his daughter, as also the author of these notes, were Bostonians; the fourth person being a Miss D——, of Yorkshire, England, who came hither to make the long circuit of the globe. Even American parlor-cars, which embrace as much of domestic comfort as is compatible with their legitimate purpose, could not prevent our being somewhat fatigued by an unbroken journey of over five hundred miles, when we reached Niagara Falls at two o'clock in the morning. And yet the day seemed short by reason of the varied and beautiful scenery of the Hoosac Tunnel route, particularly in the region of the Deerfield Valley, and also west of the Massachusetts state line. The abundant foliage was in its autumnal prime, not yet having been touched by the wand of the Frost King, while the teeming fields gave evidence both of fertility of soil and skilled cultivation. The neat farm-houses were ornamented by creeping vines, and tiny flower-gardens in their fronts. Tall conical haystacks flanked the spacious, well-filled barns; big yellow pumpkins dotted the half-cleared cornfields; and handsome groups of cattle quietly ruminated in the pastures. A picturesque line of beehives, half a dozen happy children at play before the house door, and the sturdy master of the thrifty scene, leaning over the fence to exchange pleasant words with a passing neighbor on horseback, were frequent rural pictures, which were afterwards contrasted with those of other countries....