Ducks at a Distance A Waterfowl Identification Guide 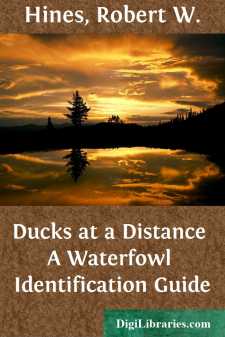 Identifying waterfowl gives many hours of enjoyment to millions of people. This guide will help you recognize birds on the wing—it emphasizes their fall and winter plumage patterns as well as size, shape, and flight characteristics. It does not include local names.

Recognizing the species of ducks and geese can be rewarding to birdwatchers and hunters—and the ducks.

Hunters can contribute to their own sport by not firing at those species that are either protected or scarce, and needed as breeders to restore the flocks. It can add to their daily limit; when extra birds of certain species can be taken legally, hunters who know their ducks on the wing come out ahead.

Knowing a mallard from a merganser has another side: gourmets prefer a corn-fed mallard to the fish duck.

What to Look For

Differences in size, shape, plumage patterns and colors, wing beat, flocking behavior, voice, and habitat—all help to distinguish one species from another.

Flock maneuvers in the air are clues. Mallards, pintails, and wigeon form loose groups; teal and shovelers flash by in small, compact bunches; at a distance, canvasbacks shift from waving lines to temporary V's.

Closer up, individual silhouettes are important. Variations of head shapes and sizes, lengths of wings and tails, and fat bodies or slim can be seen.

Within shotgun range, color areas can be important. Light conditions might make them look different, but their size and location are positive keys. The sound of their wings can help as much as their calls. Flying goldeneyes make a whistling sound; wood ducks move with a swish; canvasbacks make a steady rushing sound. Not all ducks quack; many whistle, squeal, or grunt.

Although not a hard and fast rule, different species tend to use different types of habitat. Puddle ducks like shallow marshes and creeks while divers prefer larger, deeper, and more open waters.

Most ducks shed their body feathers twice each year. Nearly all drakes lose their bright plumage after mating, and for a few weeks resemble females. This hen-like appearance is called the eclipse plumage. The return to breeding coloration varies in species and individuals of each species. Blue-winged teal and shovelers may retain the eclipse plumage until well into the winter.

Wing feathers are shed only once a year; wing colors are always the same.

Puddle ducks are typically birds of fresh, shallow marshes and rivers rather than of large lakes and bays. They are good divers, but usually feed by dabbling or tipping rather than submerging.

The speculum, or colored wing patch, is generally iridescent and bright, and often a telltale field mark.

Any duck feeding in croplands will likely be a puddle duck, for most of this group are sure-footed and can walk and run well on land. Their diet is mostly vegetable, and grain-fed mallards or pintails or acorn-fattened wood ducks are highly regarded as food.

The mallard is our most common duck, found in all flyways. The males are often called "greenheads." The main wintering area is the lower Mississippi basin, and along the gulf coast, but many stay as far north as open waters permits.

Flocks often feed in early morning and late afternoon in nearby harvested fields, returning to marshes and creeks to spend the night.

The flight is not particularly rapid. Hens have a loud quack; the drake's voice is a low-pitched kwek-kwek.

These ducks use all four flyways, but are most plentiful in the west....