Drug Supplies in the American Revolution 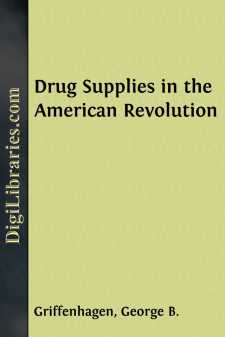 DRUG SUPPLIES IN THE AMERICAN REVOLUTION

At the start of the Revolution, the Colonies were cut off from the source of their usual drug supply, England. A few drugs trickled through from the West Indies, but by 1776 there was an acute shortage.

Lack of coordination and transportation resulted in a scarcity of drugs for the army hospitals even while druggists in other areas resorted to advertising in order to sell their stocks. Some relief came from British prize ships captured by the American navy and privateers, but the chaotic condition of drug supply was not eased until the alliance with France early in 1778.

As one historian has reminded us, "few fields of history have been more intensively cultivated by successive generations of historians; few offer less reward in the shape of fresh facts or theories" than does the American Revolutionary War. This is true to some extent even in the medical history of the Revolution. The details of the feud within the medical department of the army have been told and retold. Even accounts of the drugs employed and pharmaceutical services have been presented, primarily in the form of biographies and as reviews of the Lititz Pharmacopoeia of 1778. However, practically nothing has been published on the actual availability of medical supplies. Furthermore, the discovery of several significant but unrecorded account books of private druggists who furnished sizable quantities of drugs to the Continental Army and a careful re-evaluation of the unusually significant papers of Dr. Jonathan Potts, Revolutionary War surgeon, justify a review of the drug supplies during the early years of the war.

As early as February 21, 1775, the Provincial Congress of Massachusetts appointed a committee to determine what medical supplies would be necessary should colonial troops be required to take the field. Three days later the Congress voted to "make an inquiry where fifteen doctor's chests can be got, and on what terms"; and on March 7 it directed the committee of supplies "to make a draft in favor of Doct. Joseph Warren and Doct. Benjamin Church, for five hundred pounds, lawful money, to enable them to purchase such articles for the provincial chests of medicine as cannot be got on credit."

A unique ledger of the Greenleaf apothecary shop of Boston reveals that this pharmacy on April 4, 1775, supplied at least 5 of the 15 chests of medicines. The account, in the amount of just over £247, is listed in the name of the Province of the Massachusetts Bay, and shows that £51 was paid in cash by Dr. Joseph Warren. The remaining £196 was not paid until August 10, after Warren had been killed in the Battle of Bunker Hill.

The 15 medicine chests, including presumably the five supplied by Greenleaf, were distributed on April 18—three at Sudbury and two each at Concord, Groton, Mendon, Stow, Worcester, and Lancaster. No record has been found to indicate whether or not the British discovered the medical chests at Concord, but, inasmuch as the patriots were warned of the British movement, it is very likely that the chests were among the supplies that were carried off and hidden....