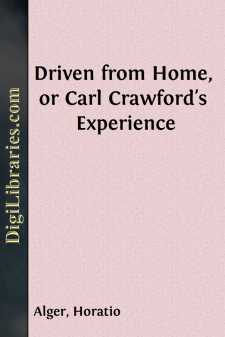 A boy of sixteen, with a small gripsack in his hand, trudged along the country road. He was of good height for his age, strongly built, and had a frank, attractive face. He was naturally of a cheerful temperament, but at present his face was grave, and not without a shade of anxiety. This can hardly be a matter of surprise when we consider that he was thrown upon his own resources, and that his available capital consisted of thirty-seven cents in money, in addition to a good education and a rather unusual amount of physical strength. These last two items were certainly valuable, but they cannot always be exchanged for the necessaries and comforts of life.

For some time his steps had been lagging, and from time to time he had to wipe the moisture from his brow with a fine linen handkerchief, which latter seemed hardly compatible with his almost destitute condition.

I hasten to introduce my hero, for such he is to be, as Carl Crawford, son of Dr. Paul Crawford, of Edgewood Center. Why he had set out to conquer fortune single-handed will soon appear.

A few rods ahead Carl's attention was drawn to a wide-spreading oak tree, with a carpet of verdure under its sturdy boughs.

"I will rest here for a little while," he said to himself, and suiting the action to the word, threw down his gripsack and flung himself on the turf.

"This is refreshing," he murmured, as, lying upon his back, he looked up through the leafy rifts to the sky above. "I don't know when I have ever been so tired. It's no joke walking a dozen miles under a hot sun, with a heavy gripsack in your hand. It's a good introduction to a life of labor, which I have reason to believe is before me. I wonder how I am coming out—at the big or the little end of the horn?"

He paused, and his face grew grave, for he understood well that for him life had become a serious matter. In his absorption he did not observe the rapid approach of a boy somewhat younger than himself, mounted on a bicycle.

The boy stopped short in surprise, and leaped from his iron steed.

"Why, Carl Crawford, is this you? Where in the world are you going with that gripsack?"

"Going to seek my fortune," he answered, soberly.

"Well, I hope you'll find it. Don't chaff, though, but tell the honest truth."

"I have told you the truth, Gilbert."

With a puzzled look, Gilbert, first leaning his bicycle against the tree, seated himself on the ground by Carl's side.

"Has your father lost his property?" he asked, abruptly.

"Has he disinherited you?"

"Have you left home for good?"

"I have left home—I hope for good."

"Have you quarreled with the governor?"

"I hardly know what to say to that. There is a difference between us."

"He doesn't seem like a Roman father—one who rules his family with a rod of iron."

"No; he is quite the reverse. He hasn't backbone enough."

"So it seemed to me when I saw him at the exhibition of the academy. You ought to be able to get along with a father like that, Carl."

"So I could but for one thing."

"I have a stepmother!" said Carl, with a significant glance at his companion....