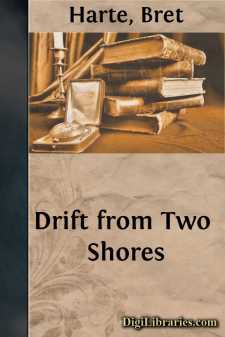 THE MAN ON THE BEACH I

He lived beside a river that emptied into a great ocean. The narrow strip of land that lay between him and the estuary was covered at high tide by a shining film of water, at low tide with the cast-up offerings of sea and shore. Logs yet green, and saplings washed away from inland banks, battered fragments of wrecks and orange crates of bamboo, broken into tiny rafts yet odorous with their lost freight, lay in long successive curves,—the fringes and overlappings of the sea. At high noon the shadow of a seagull's wing, or a sudden flurry and gray squall of sandpipers, themselves but shadows, was all that broke the monotonous glare of the level sands.

He had lived there alone for a twelvemonth. Although but a few miles from a thriving settlement, during that time his retirement had never been intruded upon, his seclusion remained unbroken. In any other community he might have been the subject of rumor or criticism, but the miners at Camp Rogue and the traders at Trinidad Head, themselves individual and eccentric, were profoundly indifferent to all other forms of eccentricity or heterodoxy that did not come in contact with their own. And certainly there was no form of eccentricity less aggressive than that of a hermit, had they chosen to give him that appellation. But they did not even do that, probably from lack of interest or perception. To the various traders who supplied his small wants he was known as "Kernel," "Judge," and "Boss." To the general public "The Man on the Beach" was considered a sufficiently distinguishing title. His name, his occupation, rank, or antecedents, nobody cared to inquire. Whether this arose from a fear of reciprocal inquiry and interest, or from the profound indifference before referred to, I cannot say.

He did not look like a hermit. A man yet young, erect, well-dressed, clean-shaven, with a low voice, and a smile half melancholy, half cynical, was scarcely the conventional idea of a solitary. His dwelling, a rude improvement on a fisherman's cabin, had all the severe exterior simplicity of frontier architecture, but within it was comfortable and wholesome. Three rooms—a kitchen, a living room, and a bedroom—were all it contained.

He had lived there long enough to see the dull monotony of one season lapse into the dull monotony of the other. The bleak northwest trade-winds had brought him mornings of staring sunlight and nights of fog and silence. The warmer southwest trades had brought him clouds, rain, and the transient glories of quick grasses and odorous beach blossoms. But summer or winter, wet or dry season, on one side rose always the sharply defined hills with their changeless background of evergreens; on the other side stretched always the illimitable ocean as sharply defined against the horizon, and as unchanging in its hue. The onset of spring and autumn tides, some changes among his feathered neighbors, the footprints of certain wild animals along the river's bank, and the hanging out of party-colored signals from the wooded hillside far inland, helped him to record the slow months....