Dreamers of the Ghetto 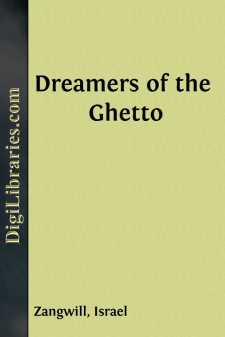 This is a Chronicle of Dreamers, who have arisen in the Ghetto from its establishment in the sixteenth century to its slow breaking-up in our own day. Some have become historic in Jewry, others have penetrated to the ken of the greater world and afforded models to illustrious artists in letters, and but for the exigencies of my theme and the faint hope of throwing some new light upon them, I should not have ventured to treat them afresh; the rest are personally known to me or are, like "Joseph the Dreamer," the artistic typification of many souls through which the great Ghetto dream has passed. Artistic truth is for me literally the highest truth: art may seize the essence of persons and movements no less truly, and certainly far more vitally, than a scientific generalization unifies a chaos of phenomena. Time and Space are only the conditions through which spiritual facts straggle. Hence I have here and there permitted myself liberties with these categories. Have I, for instance, misplaced the moment of Spinoza's obscure love-episode—I have only followed his own principle, to see things sub specie æternitatis, and even were his latest Dutch editor correct in denying the episode altogether, I should still hold it true as summarizing the emotions with which even the philosopher must reckon. Of Heine I have attempted a sort of composite conversation-photograph, blending, too, the real heroine of the little episode with "La Mouche." His own words will be recognized by all students of him—I can only hope the joins with mine are not too obvious. My other sources, too, lie sometimes as plainly on the surface, but I have often delved at less accessible quarries. For instance, I owe the celestial vision of "The Master of the Name" to a Hebrew original kindly shown me by my friend Dr. S. Schechter, Reader in Talmudic at Cambridge, to whose luminous essay on the Chassidim, in his Studies in Judaism, I have a further indebtedness. My account of "Maimon the Fool" is based on his own (not always reliable) autobiography, of which I have extracted the dramatic essence, though in the supplementary part of the story I have had to antedate slightly the publication of Mendelssohn's "Jerusalem" and the fame of Kant. In fine, I have never hesitated to take as an historian or to focus and interpret as an imaginative artist.

I have placed "A Child of the Ghetto" first, not only because the Venetian Jewry first bore the name of Ghetto, but because this chapter may be regarded as a prelude to all the others. Though the Dream pass through Smyrna or Amsterdam, through Rome or Cairo, through Jerusalem or the Carpathians, through London or Berlin or New York, almost all the Dreamers had some such childhood, and it may serve to explain them. It is the early environment from which they all more or less emerged.

And there is a sense in which the stories all lead on to that which I have placed last. The "Child of the Ghetto" may be considered "father to the man" of "Chad Gadya" in that same city of the sea....