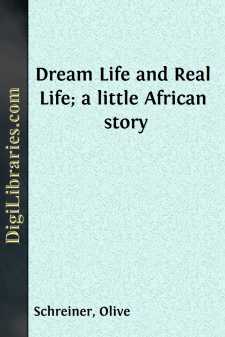 I. DREAM LIFE AND REAL LIFE; A LITTLE AFRICAN STORY.

Little Jannita sat alone beside a milk-bush. Before her and behind her stretched the plain, covered with red sand and thorny karoo bushes; and here and there a milk-bush, looking like a bundle of pale green rods tied together. Not a tree was to be seen anywhere, except on the banks of the river, and that was far away, and the sun beat on her head. Round her fed the Angora goats she was herding; pretty things, especially the little ones, with white silky curls that touched the ground. But Jannita sat crying. If an angel should gather up in his cup all the tears that have been shed, I think the bitterest would be those of children.

By and by she was so tired, and the sun was so hot, she laid her head against the milk-bush, and dropped asleep.

She dreamed a beautiful dream. She thought that when she went back to the farmhouse in the evening, the walls were covered with vines and roses, and the kraals were not made of red stone, but of lilac trees full of blossom. And the fat old Boer smiled at her; and the stick he held across the door, for the goats to jump over, was a lily rod with seven blossoms at the end. When she went to the house her mistress gave her a whole roaster-cake for her supper, and the mistress's daughter had stuck a rose in the cake; and her mistress's son-in-law said, "Thank you!" when she pulled off his boots, and did not kick her.

It was a beautiful dream.

While she lay thus dreaming, one of the little kids came and licked her on her cheek, because of the salt from her dried-up tears. And in her dream she was not a poor indentured child any more, living with Boers. It was her father who kissed her. He said he had only been asleep—that day when he lay down under the thorn-bush; he had not really died. He felt her hair, and said it was grown long and silky, and he said they would go back to Denmark now. He asked her why her feet were bare, and what the marks on her back were. Then he put her head on his shoulder, and picked her up, and carried her away, away! She laughed—she could feel her face against his brown beard. His arms were so strong.

As she lay there dreaming, with the ants running over her naked feet, and with her brown curls lying in the sand, a Hottentot came up to her. He was dressed in ragged yellow trousers, and a dirty shirt, and torn jacket. He had a red handkerchief round his head, and a felt hat above that. His nose was flat, his eyes like slits, and the wool on his head was gathered into little round balls. He came to the milk-bush, and looked at the little girl lying in the hot sun. Then he walked off, and caught one of the fattest little Angora goats, and held its mouth fast, as he stuck it under his arm. He looked back to see that she was still sleeping, and jumped down into one of the sluits. He walked down the bed of the sluit a little way and came to an overhanging bank, under which, sitting on the red sand, were two men. One was a tiny, ragged, old bushman, four feet high; the other was an English navvy, in a dark blue blouse....