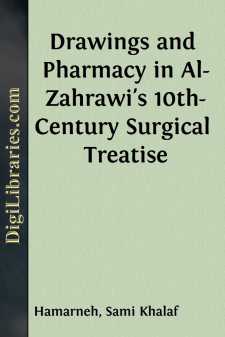 Probably the earliest independent work in Arabic Spain to embrace the whole of medical knowledge of the time is the encyclopedic al-TasrГ„В«f, written in the late 10th century by AbГ…В« al-QГ„ВЃsim al-ZahrГ„ВЃwГ„В«, also known as Abulcasis. Consisting of 30 treatises, it is the only known work of al-ZahrГ„ВЃwГ„В« and it brought him high prestige in the western world.

Here we are concerned only with his last treatise, on surgery. With its many drawings of surgical instruments, intended for the instruction of apprentices, its descriptions of formulas and medicinal preparations, and its lucid observations on surgical procedures, this treatise is perhaps the oldest of its kind.

Scholars today have available a translation of the text and reproductions of the drawings, but many of the latter are greatly modified from the originals.

This study reproduces examples of al-ZahrГ„ВЃwГ„В«’s original illustrations, compares some with early drawings based on them, and comments on passages in the treatise of interest to students of pharmacy and medical therapy.

The Author: Sami Hamarneh undertook this research into the history of medicine in connection with his duties as associate curator of medical sciences in the United States National Museum, Smithsonian Institution.

HE INTRODUCTION OF THE WRITINGS of AbГ…В« al-QГ„ВЃsim Khalaf ibn ГЉВ»AbbГ„ВЃs al-ZahrГ„ВЃwГ„В«—better known as Abulcasis (d. ca. 1013)—to Western Europe was through the Latin translation of his surgical treatise (maqГ„ВЃlah) by Gerard of Cremona (d. 1187). The response to this treatise, thereafter, was much greater than the attention paid to the surgery of any of the three renowned physicians of the Eastern Caliphate: al-RГ„ВЃzГ„В« (Latin, Rhazes, d. ca. 925), the greatest clinician in Arabic medicine; al-MajГ…В«sГ„В« (Haly AbbГ„ВЃs, d. 994), the author of the encyclopedic medical work, al-MalakГ„В«; and Ibn SГ„В«nГ„ВЃ (Avicenna, 980-1037), the author of the famous al-QГ„ВЃnГ…В«n fГ„В« al-ГЎВ№В¬ibb, a codification of the whole of medical knowledge. Because of the widespread dissemination of this Latin version in medieval Europe beginning with the latter part of the 12th century, al-ZahrГ„ВЃwГ„В« attained more prestige in the West than he did in Arabic Spain, his native country, or in any other part of the Islamic world.

Figure 2.—The myrtle-leaf shape recommended for paper on which medicine is to be placed for cauterizing eyelid. Top, from original Arabic manuscript (Tüb. MS. 91), courtesy Universitätsbibliothek Tübingen. Bottom, from Channing, Albucasis

The fame attached to this surgical treatise, the 30th and last in al-ZahrГ„ВЃwГ„В«’s encyclopedic work al-TaГЎВ№ВЈrГ„В«f Liman ГЉВ»Ajiza ГЉВ»an al-TaГЉВј lГ„В«f, is founded on certain merits. The text is characterized by lucidity, careful description, and a touch of original observation of the surgical operations to which the treatise as a whole is devoted. Al-ZahrГ„ВЃwГ„В« furnishes his own drawings of the surgical and dental instruments he used, devised, or recommended for a more efficient performance....