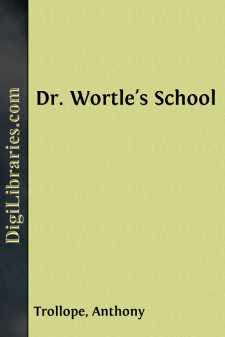 The Rev. Jeffrey Wortle, D.D., was a man much esteemed by others,—and by himself. He combined two professions, in both of which he had been successful,—had been, and continued to be, at the time in which we speak of him. I will introduce him to the reader in the present tense as Rector of Bowick, and proprietor and head-master of the school established in the village of that name. The seminary at Bowick had for some time enjoyed a reputation under him;—not that he had ever himself used so new-fangled and unpalatable a word in speaking of his school. Bowick School had been established by himself as preparatory to Eton. Dr. Wortle had been elected to an assistant-mastership at Eton early in life soon after he had become a Fellow of Exeter. There he had worked successfully for ten years, and had then retired to the living of Bowick. On going there he had determined to occupy his leisure, and if possible to make his fortune, by taking a few boys into his house. By dint of charging high prices and giving good food,—perhaps in part, also, by the quality of the education which he imparted,—his establishment had become popular and had outgrown the capacity of the parsonage. He had been enabled to purchase a field or two close abutting on the glebe gardens, and had there built convenient premises. He now limited his number to thirty boys, for each of which he charged £200 a-year. It was said of him by his friends that if he would only raise his price to £250, he might double the number, and really make a fortune. In answer to this, he told his friends that he knew his own business best;—he declared that his charge was the only sum that was compatible both with regard to himself and honesty to his customers, and asserted that the labours he endured were already quite heavy enough. In fact, he recommended all those who gave him advice to mind their own business.

It may be said of him that he knew his own so well as to justify him in repudiating counsel from others. There are very different ideas of what "a fortune" may be supposed to consist. It will not be necessary to give Dr. Wortle's exact idea. No doubt it changed with him, increasing as his money increased. But he was supposed to be a comfortable man. He paid ready money and high prices. He liked that people under him should thrive,—and he liked them to know that they throve by his means. He liked to be master, and always was. He was just, and liked his justice to be recognised. He was generous also, and liked that, too, to be known. He kept a carriage for his wife, who had been the daughter of a poor clergyman at Windsor, and was proud to see her as well dressed as the wife of any county squire. But he was a domineering husband. As his wife worshipped him, and regarded him as a Jupiter on earth from whose nod there could be and should be no appeal, but little harm came from this. If a tyrant, he was an affectionate tyrant. His wife felt him to be so. His servants, his parish, and his school all felt him to be so....