Dr. Scudder's Tales for Little Readers, About the Heathen. 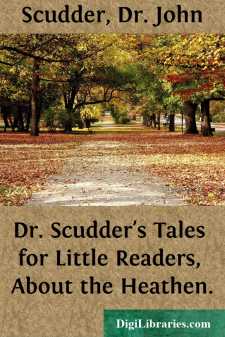 My dear children—When I was a little boy, my dear mother taught me, with the exception of the last line, the following prayer:

Though I am now more than fifty years old, I often like to say this prayer before I go to sleep. Have you ever learned it, my dear children? If you have not, I hope that you will learn it now; and I hope, too, that when you say your other prayers at night, you will also say this. I think that you would be glad to see how this prayer looks in the Tamul language—the language in which I am now preaching the Gospel, and in which I hope that some of you will hereafter tell the heathen of the Saviour. The following is a translation of it:

I wish that all the little heathen children knew this prayer; but their fathers and mothers do not teach it to them. Their fathers and mothers teach them to pray to gods of gold, or brass, or stone. They take them, while they are very young, to their temples, and teach them to put up their hands before an idol, and say, "Swammie." Swammie means Lord. As idolatry is the root of all sin, these children, as you may suppose, in early life become very wicked. They disobey their parents, speak bad words, call ill names, swear, steal, and tell lies. They also throw themselves on the ground in anger, and in their rage they tear their hair, or throw dirt over their heads, and do many other wicked things.

Let me give you an instance, to show you how they will speak bad words. A few months ago, a little girl about twelve years of age was brought to me, with two tumors in her back. To cut them out, I had to make an incision about eight inches in length; and as one of these tumors had extended under the shoulder-blade she suffered much before the operation was finished. While I was operating she cried out, "I will pull out my eyes." "I will pull out my tongue." "Kurn kertta tayvun." The translation of this is, "The blind-eyed god." By this expression, she meant to say, "What kind of a god are you, not to look upon me, and help me in my distress?" If this little girl had had a Christian father to teach her to love the Saviour, she would not have used such bad language. But this father was even more wicked than his daughter, inasmuch as those who grow old in sin, are worse than those who have not sinned so long. I never saw a more hard-hearted parent. That he was so, will appear from his conduct after the operation was finished. He left his daughter, and went off to his home, about forty miles distant. Before going, he said to his wife, or to one who came with her, "If the child gets well, bring her home; if she dies, take her away and bury her."

I hope, my dear children, that when you think of the wicked little girl just mentioned, you will be warned never to speak bad words. God will be very angry with you, if you do. Did you never read what is said in 2 Kings, 2d chapter and 23d verse, about the little children who mocked the prophet Elijah, and spoke bad words to him....