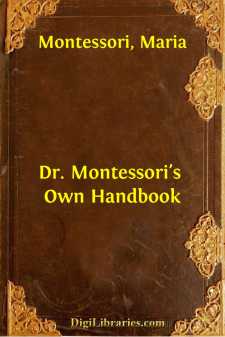 Recent years have seen a remarkable improvement in the conditions of child life. In all civilized countries, but especially in England, statistics show a decrease in infant mortality.

Related to this decrease in mortality a corresponding improvement is to be seen in the physical development of children; they are physically finer and more vigorous. It has been the diffusion, the popularization of science, which has brought about such notable advantages. Mothers have learned to welcome the dictates of modern hygiene and to put them into practice in bringing up their children. Many new social institutions have sprung up and have been perfected with the object of assisting children and protecting them during the period of physical growth.

In this way what is practically a new race is coming into being, a race more highly developed, finer and more robust; a race which will be capable of offering resistance to insidious disease.

What has science done to effect this? Science has suggested for us certain very simple rules by which the child has been restored as nearly as possible to conditions of a natural life, and an order and a guiding law have been given to the functions of the body. For example, it is science which suggested maternal feeding, the abolition of swaddling clothes, baths, life in the open air, exercise, simple short clothing, quiet and plenty of sleep. Rules were also laid down for the measurement of food adapting it rationally to the physiological needs of the child’s life.

Yet with all this, science made no contribution that was entirely new. Mothers had always nursed their children, children had always been clothed, they had breathed and eaten before.

The point is, that the same physical acts which, performed blindly and without order, led to disease and death, when ordered rationally were the means of giving strength and life.

The great progress made may perhaps deceive us into thinking that everything possible has been done for children.

We have only to weigh the matter carefully, however, to reflect: Are our children only those healthy little bodies which to-day are growing and developing so vigorously under our eyes? Is their destiny fulfilled in the production of beautiful human bodies?

In that case there would be little difference between their lot and that of the animals which we raise that we may have good meat or beasts of burden.

Man’s destiny is evidently other than this, and the care due to the child covers a field wider than that which is considered by physical hygiene. The mother who has given her child his bath and sent him in his perambulator to the park has not fulfilled the mission of the “mother of humanity.” The hen which gathers her chickens together, and the cat which licks her kittens and lavishes on them such tender care, differ in no wise from the human mother in the services they render.

No, the human mother if reduced to such limits devotes herself in vain, feels that a higher aspiration has been stifled within her....