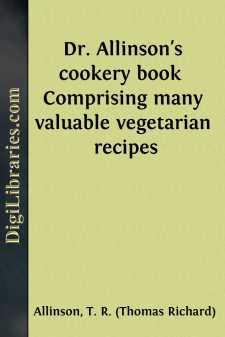 This book is written with the object of laying before the public a cookery book which will be useful not only to vegetarians, but also to flesh eaters, who are often at a loss for recipes for non-flesh dishes. Nowadays most people admit that "too much meat is eaten"; but when the housewife tries to put before her family or friends a meal in which meat is to be conspicuous by its absence, she is often at a loss how to set about it.

Vegetarians also frequently stay with non-vegetarian friends, or lodge with others who do not understand how to provide for them. For such this book will especially prove useful, for in it will be found a set of thirty menus, one for each day in a month, giving suitable recipes with quantities for one person only. Throughout this book it will be found that the use of wholemeal has been introduced in the place of white flour. Those persons who do not care to follow the hygienic principle in its entirety can easily substitute white flour if preferred. The recipes have been written bearing in mind the necessity for a wholesome diet; and they will be found to be less rich than those in most of the cookery books published. Should any one wish to make the dishes richer, it can easily be done by an addition of butter, eggs, or cream.

Let me draw the attention of vegetarians to the use of soaked sago in many dishes. This is a farinaceous food which should be used much more largely in vegetarian cookery than it is. Thoroughly soaked sago should be used in all dishes, savouries or sweets, in which a substitute for suet is required to lighten the mixture; that is, in boiled savouries or sweets which are largely made of wholemeal, as, for instance, in vegetable haggis, roly-poly pudding, and all fruit or vegetable puddings which are boiled in a paste. When soaked sago is used (taking a teacupful of dry sago to two breakfastcupfuls of meal) a light paste will be obtained which would mislead any meat eater into the belief that suet or, at any rate, baking powder had been used. Baking powder, tartaric acid, soda and bicarbonate of soda, are all most injurious to the system, and these chemicals have been left out of this book entirely. In breads and cakes I have used a small quantity of yeast for the rising of the dough; those who once have got accustomed to the use of yeast will not find it any more trouble than using baking powder. It may here be beneficial to give a few hints as to the harm done by the use of the most commonly introduced chemicals, namely, soda, bicarbonate of soda, baking powder, tartaric acid, and citric acid. Not only do they delay the digestion of the foods in which they are used, and give rise to various stomach troubles, but also cause rheumatism and gout, and often are the primary cause of stone in the kidney and bladder. Another danger lies in the fact that these chemicals are too dear to be supplied pure to the public, which always demands cheap goods, and the result is that many of the chemicals in the market are mixed with other still worse poisons, like arsenic, for instance. Self-raising flour, which is liked by so many on account of its convenience, is nothing but ordinary flour mixed with some sort of baking powder; in the same way egg powders are simply starch powders, coloured and flavoured, mixed with baking powder. Tartaric acid and citric acid also belong to the class of injurious chemicals. They are often used in the making of acid drinks, when lemons are not handy. They irritate the stomach violently, and often cause acute dyspepsia. These few remarks will, I hope, convince the readers that all these chemicals are best avoided in culinary preparations. Even salt and spices are best used in great moderation; if our dishes could be prepared without them it would be far the best; but it takes a long time to wean people entirely from the use of condiments; the first step towards it is to use them as sparingly as possible.

I have tried to make this a hygienic cookery book; but there are a number of dishes introduced which can hardly claim to be hygienic; it has to be left to the good judgment of the readers to use them on rare occasions only, and it will be better for the health of each individual if the plainer dishes only are prepared for the daily table. I wish here to impress on vegetarians, and those who wish to give the diet a trial, not to eat much pulse; this is the rock on which many "would-be vegetarians" come to grief. They take these very concentrated, nitrogenous foods in rather large quantities, because they have an idea that only they will support them when the use of meat is abandoned. They are foods which, to be beneficial to the system of the consumer, require a great deal of muscular exertion on his part. The results to persons of sedentary habits of eating pulse foods often are indigestion, heavy and dull feelings, and general discomfort. In my own household butter beans, the most concentrated of all foods, come on the table perhaps once a month, lentils or peas perhaps once a week. None but those persons who have strong digestive organs should eat pulse foods at all; and then only when they have plenty of physical work to do. I have known several people who tried vegetarianism who have given up the trial in despair, and, when I inquired closely into the causes, the abuse of pulse food was generally the chief one.

I will now give a list of the composition of the various foods, which may be instructive and useful to those to whom the study of dietetics is new, as well as to vegetarians who may wish to use it for reference. The list is copied from a little pamphlet by A.W. Duncan, published by the Vegetarian Society in Manchester.