Down The River Buck Bradford and His Tyrants 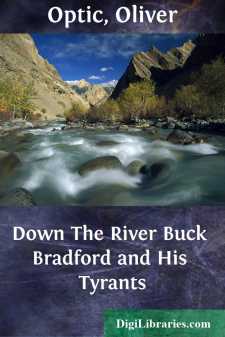 TWO OF THE TYRANTS.

"Here, Buck Bradford, black my boots, and be quick about it."

That was what Ham Fishley said to me.

That was what I said to Ham Fishley.

Neither of us was gentlemanly, nor even civil. I shall not apologize for myself, and certainly not for Ham, though he inherited his mean, tyrannical disposition from both his father and his mother. If he had civilly asked me to black his boots, I would have done it. If he had just told me that he was going to a party, that he was a little late, and asked me if I would assist him, I would have jumped over his head to oblige him, though he was three inches taller than I was. I am willing to go a step farther. If this had been the first, or even the twentieth, time that Ham had treated me in this shabby manner, I would have submitted. For three years he had been going on from bad to worse, till he seemed to regard me not only as a dog, but as the meanest sort of a dog, whom he could kick and cuff at pleasure.

I had stood this sort of thing till I could not stand it any longer. I had lain awake nights thinking of the treatment bestowed upon me by Captain Fishley and his wife, and especially by their son Ham; and I had come deliberately to the conclusion that something must be done. I was not a hired servant, in the ordinary sense of the term; but, whether I was or was not a servant, I was entitled to some consideration.

"What's that you say?" demanded Ham, leaping over the counter of the store.

I walked leisurely out of the shop, and directed my steps towards the barn; but I had not accomplished half the distance before my tyrant overtook me. Not being willing to take the fire in the rear, I halted, wheeled about, and drew up in order of battle. I had made up my mind to keep perfectly cool, whatever came; and when one makes up his mind to be cool, it is not half so hard to succeed as some people seem to think.

"I told you to black my boots," said Ham, angrily.

He stepped up to me; but I didn't budge an inch. I braced up every fibre of my frame in readiness for the shock of battle; but there was no shock of battle about it.

"I guess I'll let the old man settle this," said Ham, after a glance at me, which seemed very unsatisfactory.

My tyrant turned on his heel, and hastened back to the store. Ham Fishley's father was "the old man," and I knew that it would not be for the want of any good will on his part, if the case was not settled by him. I had rebelled, and I must take my chances. I went to the barn, harnessed the black horse to the wagon, and hitched him at a post in the yard, in readiness to go down to Riverport for the mail, which I used to do every evening after supper.

Of course my thoughts were mainly fixed upon the settlement with the old man; and I expected every moment to see him rushing upon me, like an untamed tiger, to wreak his vengeance upon my head....