Down South or, Yacht Adventure in Florida 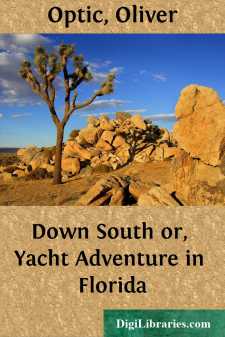 "That's it, as true as you live, Captain Alick!" exclaimed Bob Washburn, the mate of the Sylvania, as he dropped the spy-glass from his right eye. "Your dead-reckoning was correct every time."

"I have no doubt you are right, Washburn," I replied, referring to an open volume that lay on the shelf under the forward windows of the pilot-house. "'A square tower, painted white, sixty-eight feet above the sea,'" I continued, reading from the Coast Pilot. "But there is another tower, more than twice that height. Ah, here is a note in pencil I made: 'The government has built a new tower, one hundred and sixty feet high.'"

"That must be St. Augustine Light: there can be no possible doubt of it. It fits the description; and that is exactly where we ought to find it," added the mate.

The Sylvania had been on a ten weeks' cruise to Nassau, Havana, and the Bermuda Islands. In Havana we had been startled by the report of a few cases of yellow fever, and we had hastily departed for the Bermudas, where we had cruised by sea and journeyed by land for a month. The steam-yacht was now on her return to Florida. The weather had been thick and rainy, and for the last two days I had failed to obtain an observation. But we had heaved the log every two hours, though there was rarely a variation of half a knot from our regular speed. We had made careful calculations and allowances for the current of the Gulf Stream, and the result was that we came out right when we made the Florida coast.

We had two sets of instruments on board; and Washburn and myself had each made an independent observation, when the sky was clear enough to permit us to do so, and had ciphered out the latitude and longitude. We had also figured up the dead-reckoning separately, as much for practice as to avoid mistakes. We had varied a little on the dead-reckoning, and it proved that I was the nearer right, as the position of St. Augustine Light proved.

The steam-yacht was under charter for a year to my cousin, Owen Garningham, a young Englishman, who was spending the winter in the South. The after cabin was occupied by four other persons, who were his guests,--Colonel Shepard, his wife, son, and daughter. Miss Edith, the daughter, was Owen's "bright particular star," and she was one of the most beautiful young ladies I ever saw. I may add that she was as gentle and amiable as she was pretty. All the Shepard family were very pleasant people, invariably kind to the ship's company; and though the Colonel was a very wealthy man, none of them ever "put on airs" in their relations with the crew.

Though I did not pride myself on the fact that some of my ship's company had "blue blood" in their veins, I certainly believed that no vessel was ever manned by a more intelligent, gentlemanly, and skilful crew. Robert C. Washburn, the mate, was a college student, who would return to his studies at the end of the voyage. He was one of the best fellows I had ever met, and was competent to command any vessel, on any voyage, so far at least as its navigation and management were concerned....