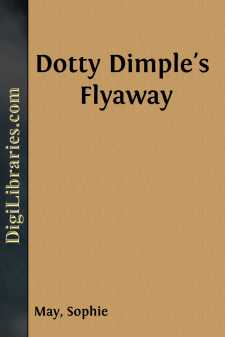 CHAPTER I. BEGINNING TO REMEMBER.

Katie Clifford was a very bright child. She almost knew enough to keep out of fire and water, but not quite. She looked like other little girls, only so wise,—O, so very wise!—that you couldn't tell her any news about the earth, or the sun, moon, and stars, for she knew all about it "byfore."

Her hair was soft and flying like corn-silk, and when the wind took it you would think it meant to blow it off like a dandelion top. She was so light and breezy, and so little for her age, that her father said "they must put a cent in her pocket to keep her from flying away;" so, after that, the family began to call her Flyaway. She thought it was her name, and that when people said "Katie," it was a gentle way they had of scolding.

Everybody petted her. Her brother Horace put his heart right under her feet, and she danced over it. Her "uncle Eddard" said "she drove round the world in a little chariot, and all her friends were harnessed to it, only they didn't know it."

Her shoulders were very little, but they bore a crushing weight of care. From the time she began to talk, she took upon herself the burden of the whole family. When Mrs. Clifford had a headache, Flyaway was so full of pity that nothing could keep her from climbing upon the sufferer, stroking her face, and saying, "O, my dee mamma," or perhaps breaking the camphor bottle over her nose.

She sat at table in a high chair beside her father, and might have learned good manners if it had not been for the care she felt of Horace. She could scarcely attend to her own little knife and fork, because she was so busy watching her brother. She wished to see for herself that he was sitting straight, and not leaning his elbows on the table. If he made any mistake she cried, "Hollis!" in a tone as sweet as a wind-harp, though she meant it to be terribly severe, adding to the effect by shaking the corn-silk on her head in high displeasure. If she could correct him she thought she had done as much good in the family as if she had behaved well herself. He received all rebukes very meekly, with a "Thank you, little Topknot. What would be done here without you to preserve order?"

It is strange to think of, but the first thing she really knew for a certainty, she was standing in a yellow chair, in her grandmother Parlin's kitchen! It was as if she had always been asleep till that minute. People did say she had once been a baby, but she could not recollect that, "it was so many years ago."

Her mind, you see, had always been as soft as a bag of feathers; and nothing that she did, or that any one else did, made much impression. But now something remarkable was taking place, and she would never forget it.

It was this: she was grinding coffee. How prettily it pattered down on the floor! What did it look like? O, like snuff, that people sneezed with. This was housework. Next thing they would ask her to wash dishes and set the table. She would grow larger and larger, and Gracie would grow littler and littler; and O, how nice it would be when she could do all the work, and Gracie had to sit in mamma's lap and be rocked!

While she stood musing thus, with a dreamy smile, and turning the handle of the mill as fast as it would go round, somebody sprang at her very unexpectedly....