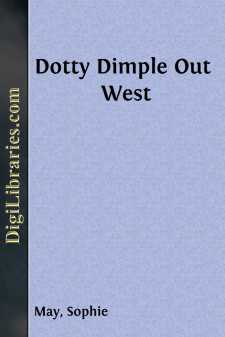 One beautiful morning in October the sun came up rejoicing. Dotty Dimple watched it from the window with feelings of peculiar pleasure.

"I should think that old sun would wear out and grow rough round the edges. Why not? Last week it was ever so dull; now it is bright. I shouldn't wonder if the angels up there have to scour it once in a while."

You perceive that Dotty's ideas of astronomy were anything but correct. She supposed the solar orb was composed of a very peculiar kind of gold, which could be rubbed as easily as Norah's tin pans, though so intensely hot that one's fingers would, most likely, be scorched in the operation.

On this particular morning she felt an unusual interest in the state of the weather. It had been decided that she should go West with her father, and this was the day set for departure. "I am happy up to my throat:" so she said to Prudy. And now all this happiness was to be buttoned up in a cunning little casaque, with new gaiters at the feet, and a hat and rosette at the top. Forty pounds or so of perfect delight going down to the depot in a carriage.

As Dotty spoke, the faintest possible shadow flickered across her radiant face; but it was only for a moment. She could not have quite everything she wanted, because she could not have Prudy; but then they were to take a basket of cold boiled eggs, sandwiches, and pies; and over these viands, with a napkin between, were two picture-books and a small spy-glass. There was a trunk with a sunshade in it, and some pretty dresses; among them the favorite white delaine, no longer stained with marmalade. There were presents in the trunk for Grace, Horace, and Katie, which were to take them by surprise. And more and better than all, Miss Dotty had in her own pocket a little porte-monnaie, containing fifty cents in scrip, with full permission to spend it all on the way. She also had a letter from Susy to be read at Boston, and one from Prudy to be read at Albany.

Yes, there was everything to be thankful for, and nothing to regret. She was quite well by this time. The rich, warm color had come back to her cheeks. She did not need the journey for the sake of her health; her papa was to take her because he chose to give her the same pleasure he had once given Prudy. It was Susy's private opinion that it was rightfully her turn this time, instead of Dotty's; but she was quite patient, and willing to wait.

It was a long journey for such a little child; and Mrs. Parlin almost regretted that the promise had been made; but the young traveller would only be gone three or four weeks, and in her aunt's family was not likely to be homesick.

It was a very slow morning to Dotty. "Seems to me," said she, vibrating between the parlor and the kitchen like a discontented little pendulum,—"seems to me it was a great deal later than this yesterday!"

She had eaten as many mouthfuls of breakfast as she possibly could in her excited condition, had kissed everybody good by twice over, and now thought it was time to be starting....