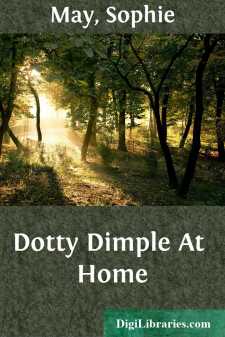 DOTTY DIMPLE AT HOME. CHAPTER I.THE LION AND THE LAMB.

Dotty Dimple, after a night of pleasant sleep, greeted herself in the morning with a groan. It was as if she had said,—

Prudy noticed the cloud on her sister's face in a moment; she saw she had "waked up wrong."

Now I have never told you how peculiarly trying it was to live with Dotty Dimple. She seemed to have, at the same time, the nature of a lion and a lamb. When the lion raged, then her eyes blazed, and she looked as if she belonged in a menagerie; but when nothing occurred to rouse her wild temper, she was as gentle and tender as a little lamb frisking by its mother's side on a summer's day.

Indeed, if I were to describe the loveliness of her manners, and the sweetness of her face, I ought to dip my pen in liquid sunshine; whereas, the blackest of ink would not be at all too dark to draw her picture when she was out of temper.

In her earliest childhood it had been worse than it was now. Then she had not tried in the least to control herself, and the lion had had his own way. After one of her wild outbursts, she would follow her mother about the house, saying, in a soft, pleading voice,—

"Say, mamma, is I your little comfort?"

Before answering Dotty, the poor mother had to call to mind all the good things the child had ever said or done, and fancy how dreadful it would be to lose her. Then she would reply,—

"Yes, Dotty, you are mamma's dear little girl; but mamma doesn't like your naughty, naughty ways."

This failed to satisfy Miss Dimple. She would cry out again, in heart-broken tones,—

"Is I your little comfort, mamma? Is I?"

So, sooner or later, Mrs. Parlin was obliged, for the sake of peace, to kiss the child, and answer, "Yes." Then, perhaps, for twenty-four hours the lion would be curled up, asleep, and out of sight in his den, and the lamb would be playfully frisking about the house, a pet for everybody.

But often and often, when Susy and Prudy came in from school or play, they found their baby sister in disgrace, perched upon the wood-box in the kitchen, with feet and hands firmly tied. There she would sit, throwing out the loudest noise possible from her little throat. It was the young lion again, roaring in his cage.

Prudy, though her heart swelled with pity, dared not say,—

"Don't scream so, little sister! Please don't pound so with your feet!"

For when the lion fits were on, it was always safest to let the unhappy child alone. Prudy, who had no more temper than a humming-bird, and Susy, who was only moderately fretful once in a while, were made very unhappy by Dotty's dreadful behavior. At such times as I describe, they even looked guilty, and cast down their eyes, for they could not help feeling their sister's conduct as a family disgrace. They never spoke to any one about it, and bore all her freaks with wonderful patience. When the little one plucked at their hair or ears, they said, pitifully,—