Dotty Dimple at Her Grandmother's 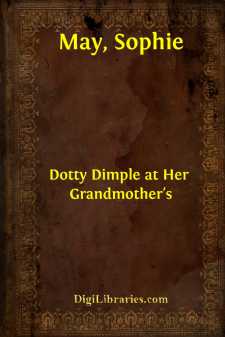 Everything was very fresh and beautiful one morning in May, as if God had just made the world. The new grass had begun to grow, and the fields were dotted over with short, golden-topped dandelions.

The three Parlin children had come to their grandmother's much earlier in the season than usual; and now on this bright Sabbath morning they were going to church.

Dotty Dimple, otherwise Alice, thought the fields looked like her Aunt Maria's green velvet toilet-cushion stuck full of pins. The spiders had spread their gauzy webs over the grass, and the dew upon them sparkled in the sunshine like jewels. "Such nice tablecloths as they would have made for the fairies," thought Dotty, "if there only were any fairies."

"The world is ever so much handsomer than it was a week ago," said Prudy, pointing towards the far-off hills. "I'd like to be on that mountain, and just put my hand out and touch the sky."

"That largest pick," said Dotty, "is Mount Blue. It's covered with blueberries, and that's why it's so blue."

"Who told you that?" asked Susy, smiling. "It isn't time yet for blueberries; and if it was, we couldn't see them forty miles off without a telescope."

"Jennie Vance told me," said Dotty; "and she ought to know, for her father is the judge."

By this time the children had reached the church, and were waiting on the steps for the rest of the family. It was pleasant to watch the people coming from up and down the street, looking so neat and peaceful. But when Jennie Vance drew near with her new summer silk and the elegant feather in her hat, Dotty's heart gave a quick double beat, half admiration, half envy. Jennie's black eyes were shining with vanity, and her nicely gaitered feet tripped daintily up the steps.

"How d'ye do?" said she, carelessly, to Dotty, and swept by her like a little ship under full sail.

"Jennie Vance needn't talk so about her new mother," whispered Prudy, "for she gives her fifty-two new dresses, one for every Sunday."

Dotty's brow darkened. Just now it seemed to her one of the greatest trials in the whole world that the dress she wore had been made over from one of Prudy's. It was a fine white organdie with a little pink sprig, but there was a darn in the skirt. Then there was no feather in her hat, and no breastpin at her throat.

Poor Dotty! She did not hear much of the sermon, but sat very quiet, counting the nails in the pews and the pipes in the organ, and watching old Mr. Gordon, who had a red silk kerchief spread over his head to guard it against the draught from the window. She listened a little to the prayers, it is true, because she knew it was wrong to let her thoughts wander when Mr. Preston was speaking to God.

When the services were over, and she was going to her Sabbath school class, she passed Jennie Vance in the aisle.

"Where are you going, Jennie?" said she.

"Going home. My mamma says I needn't stay to say my lessons and miss a warm dinner."

Jennie said this with such a toss of the head that Dotty longed to reply in a cutting manner....