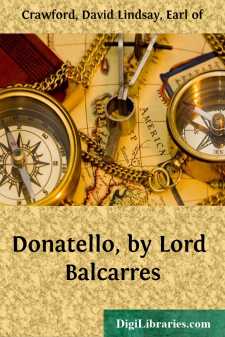 The materials for a biography of Donatello are so scanty, that his life and personality can only be studied in his works. The Renaissance gave birth to few men of productive genius whose actual careers are so little known. Unlike many of his contemporaries, Donatello composed no treatise on his art; he wrote no memoir or commentary, no sonnets, and indeed scarcely a letter of his even on business topics has survived. For specific information about his career we therefore depend upon some returns made to the Florentine tax-collectors, and upon a number of contracts and payments for work carried out in various parts of Italy. But, however familiar Donatello the sculptor may be to the student of Italian art, Donatello the man must remain a mystery. His biography offers no attraction for those whose curiosity requires minute and intimate details of domestic life. Donatello bequeathed nothing to posterity except a name, his masterpieces and a lasting influence for good.

The Denunzia de' beni, which was periodically demanded from Florentine citizens, was a declaration of income combined with what would now be called census returns. Donatello made three statements of this nature, in 1427, 1433 and 1457. It is difficult to determine his age, as in each case the date of his birth is differently inferred. But it is probable that the second of these returns, when he said that he was forty-seven years old, gives his correct age. This would place his birth in 1386, and various deductions from other sources justify this attribution. We gather also that Donatello lived with his mother Orsa, his father having died before 1415. The widow, who is mentioned in 1427, and not in 1433, presumably died before the latter date. One sister, Tita, a dowerless widow, is mentioned in the earliest denunzia, living with her mother and Donatello, her son Giuliano having been born in 1409. It is probable that Donatello had a brother, but the matter is somewhat obscure, and it is now certain that he cannot be identified with the sculptor Simone, who used to be considered Donatello's brother on the authority of Vasari.

Competition for the Baptistery Gates.

The year 1402 marks an event of far-reaching importance in the history of Italian art. Having decided to erect bronze doors for their Baptistery, the Florentines invited all artists to submit competitive designs. After a preliminary trial, six artists were selected and a further test was imposed. They were directed to make a bronze relief of given size and shape, the subject being the Sacrifice of Isaac. Few themes could have been better chosen, as the artist had to show his capacity to portray youth and age, draped and undraped figures, as well as landscape and animal life. The trial plaques were to be sent to the judges within twelve months. Donatello did not compete, being only a boy, but he must have been familiar with every stage in the contest, which excited the deepest interest in Tuscany. A jury of thirty-four experts, among whom were goldsmiths and painters as well as sculptors, assembled to deliver the final verdict....