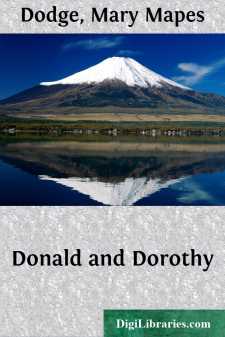 CHAPTER I. IN WHICH NONE OF THE CHARACTERS APPEAR.   HE door of the study was closed, and only Nero was to be seen. He, poor dog, stood in the wide hall gazing wistfully at the knob, and pricking up his ears whenever sounds of movement in the room aroused his hope of being admitted. Suddenly he gave a yelp of delight. Somebody surely was approaching the door. The steps—they were a man's—halted. There was a soft, rolling sound, as if the master's chair were being drawn to the table; next, a rustling of paper; a deep-voiced moan; the rapid scratching of a quill pen; then silence—silence—and poor Nero again stood at half-mast.

Any ordinary dog would have barked, or pawed impatiently at the door. But Nero was not an ordinary dog. He knew that something unusual was going on, something with which even he, the protector and pet of the household, the frisky Master of Ceremonies, must not interfere. But when the bell-pull within the room clicked sharply, and a faint tinkle came up from below, he flew eagerly to the head of the basement stairs, and wagged his bushy tail with a steady, vigorous stroke, as though it were the crank of some unseen machine which slowly and surely would draw Liddy, the housemaid, up the stairway.

The bell rang again. The machine put on more steam. Still no Liddy. Could she be out? Nero ran back to take an agonized glance at the motionless knob, leaped frantically to the stairs again—and, at that moment, the study-door opened. There was a heavy tread; the ecstatic Nero rushed in between a pair of dignified legs moving toward the great hall door; he spun wildly about for an instant, and then, with a deep sigh of satisfaction, settled down on the rug before the study fire. For there was not a soul in the room.

The house is there still; so is Nero, now an honored old dog frisky only in his memories. But old as he is in teeth and muscle, he is hardly past middle-age in the wag of his still bushy tail, and is as young as ever in happy devotion to his master. Liddy, too, is down stairs, promoted, but busy as in the days gone by; and the voice of that very bell tinkled but an hour ago.

Here is the same study; some one within, and the door closed. Opposite, on the other side of the wide hall, is the parlor, its windows looking across piazza, sloping lawn, road-way, and field, straight out to the sparkling lake beyond. Back of the parlor is a sunny sitting-room, its bay-window framing a pleasant view of flower-garden, apple-orchard, and grape-arbor—a few straggling bunches clinging to the almost leafless November vines. And within, throughout the house indeed, floats a sunny-shady combination of out-door air, with a faint, delightful odor of open wood-fires. What a quiet, homelike, beautiful place it is!

Let us look into the sitting-room.

A boy, with his back toward the door, mounted upon the end of a big sofa, his bended knee tightly held between his arms, his head thrust forward earnestly,—altogether, from the rear view, looking like a remarkable torso with a modern jacket on,—that's Donald. Near him, on the sofa, a glowing face with bright brown hair waving back from it, the chin held in two brownish little hands, and beneath that a mass of dark red merino, revealing in a meandering, drapery way that its wearer is half-kneeling, half-sitting,—that's Dorothy.

THE SPARKLING LAKE BEYOND.

I am obliged to confess it, these two inelegant objects on a very elegant piece of furniture are the hero and heroine of my story.

Do not imagine, however, that Donald and Dorothy could not, if they chose to do so, stand before you comely and fair as any girl and boy in the land. It is merely by accident that we catch this first glimpse of them. They have been on that sofa in just those positions for at least five minutes, and, from present appearances, they intend to remain so until further notice.

Dorothy is speaking, and Donald is—not exactly listening, but waiting for his turn to put in a word, thus forming what may be called a lull in the conversation; for up to this point both have been speaking together.

"It's too much for anything, so it is! I'm going to ask Liddy about it, that's what I'm going to do; for she was almost ready to tell me the other day, when Jack came in and made her mad."

"Don't you do it!" Donald's tone is severe, but still affectionate and confidential. "Don't you do it. It's the wrong way, I tell you. What did she get mad at?"

"Oh, nothing. Jack called her 'mess-mate' or something, and she flared up. But, I tell you, I'm just going to ask her right out what makes him act so."

"Nonsense," said Donald. "It's only his sailor-ways; and besides—"