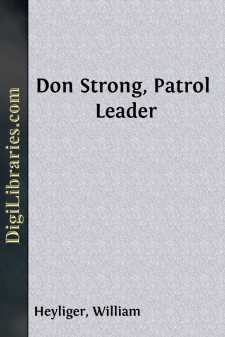 CHAPTER I THE WOLF PATROL ELECTS

A baseball rose gracefully in the air, carried on a way, and dropped. Three scouts back from a hike halted under the maple tree that bordered the village field, and unslung their haversacks.

"And did you see Tim Lally get that one?" demanded Wally Woods.

Andy Ford grinned. "Ted's the boy to keep them working. Chester will have a real town team this year."

"You bet." Ritter unscrewed the top of his canteen. "Anyway, Ted and Tim are about the whole team."

"Hold on there," Andy protested. "Where do you leave Don Strong?"

"It's Tim's catching that makes him a pitcher," Ritter answered seriously.

"Sure," said Ritter. "A catcher ought to know just how good a pitcher he is. Tim says—"

But what Tim said was not told just then. A small, wiry boy steered his bicycle up on the sidewalk and pedaled toward the tree.

"Hey, fellows!" he shouted. "Did you hear the latest? Mr. Wall is going to give a cup to the best patrol and Phil Morris is moving to Chicago."

The three scouts surrounded the bicycle.

"Who told you about the cup?" Andy Ford demanded.

"Mr. Wall told me," Bobbie Brown answered. "It's a contest, with points for everything—attendance at meeting, neatness, obeying orders, all that. There's going to be a contest every month, and at the end of three months a big scout game for points. Isn't that swell?"

"How do you know Phil Morris is moving?"

"Then the Wolf patrol elects a new leader," said Ritter. He glanced out toward where Tim Lally was catching.

The practice ended. Tim came across the grass with a big mitt under his arm. Ritter and Wally went forward to meet him.

"Tim won't get my vote," said Bobbie. "The patrol leader ought to be a fellow who's up in things, like Don, or Alex Davidson, or you—"

"Don and Alex have it all over me," said Andy.

They watched the field. Tim was walking now with Ritter and Wally. Bobbie reached a foot for the nearest pedal.

"Guess I'll ride along," he said. As he turned the corner he glanced back across his shoulder. Tim and Ritter and Wally were talking to Andy.

Bobbie rode faster. Presently he came in sight of a house with a white-washed fence in front and a sign rising above the lawn grass:

A boy who whistled as he worked was tacking wire to a door frame.

Bobbie opened the gate and pushed through with his bicycle. The whistling boy glanced up.

"To Chi—" Don Strong paused with his tack hammer raised. "That means a new patrol leader, doesn't it?" The hammer fell and the work went on.