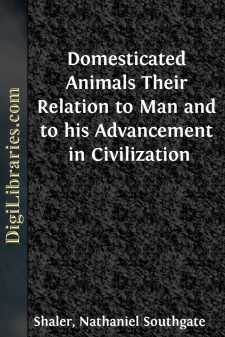 One of the effects of the modern advance in natural science has been greatly to increase the attention which is devoted to the influences that the conditions of diverse peoples have had upon their development. Man is no longer looked upon, as he was of old, as a being which had been imposed upon the earth in a sudden and arbitrary manner, set to rule the world into which he had been sent as a master. We now see him as one of the myriad species which has won its way by powers of mind out of darkness and the great struggle to the place of command. The way in which this creature, weak in body and exceedingly dependent on his surroundings, has in the modern geologic epoch come forth from the mass of the lower animals, is by far the most impressive and as yet the most unexplained phenomenon which the geologist has to consider. It is not likely that the marvellous advancement can be accounted for by any single cause; it is probably due, as are most of the great evolutions, to the concurrence of many influences; but among these which make for advance, we clearly have to reckon the animals and plants which man has learned to associate with his work of the household and the fields.

Although certain species of insects, particularly the ants, have the well-developed habit of subjugating certain creatures of their own family, man is the only vertebrate that has ever adopted the plan of domesticating a variety of animals and plants. The beginnings of this custom were made in a very remote time, and for long ages the profit which was thereby gained appears to have been but slight. Gradually, however, races, owing to their masterful quality and to the opportunities which were offered by the wild life about their dwelling places, obtained flocks and herds. In the group of continents commonly termed the old world, where there were several ancient primitive peoples of innate ability, and where there were many species of larger mammals which were well fitted for domestication, the advance in social development went on rapidly. In the new world, though the primitive races contained tribes of much ability, there was practically no chance for the people to add to their strength by the subjugation of beasts of burden, or to their food resources by the adoption of various animals which could be used for the needs of food or raiment. The advance of men when they have obtained valuable domesticated animals, and their failure to win a high station where the surrounding nature denied such opportunities, go far to prove the bearing of this accomplishment in the development of peoples.

A little consideration makes it evident to us that the advance of mankind above the original savage state is in several ways favored by the possession of domesticated animals. In the first place, each creature which is adopted into the household or the fields usually brings as its tribute a substantial contribution to the resources which tend to make the society commercially successful. When we consider the enlargements of resources and the diversification of industries which rest upon the adoption of any one of these animals—as, for instance, the horse—we see in a way what the possession of domesticated animals and plants really means, and are in a position to conceive, though at best but dimly, what the scores of these captive species have done for us....