Domestic Pleasures, or, the Happy Fire-side 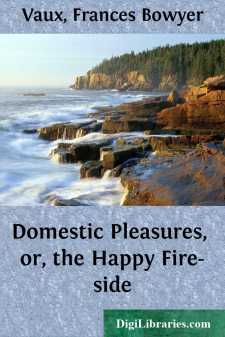 The rain came down in torrents, and beat violently against the parlour windows, whilst a keen autumnal blast made the children shiver, even by the side of a good fire. Their little hearts glowed with gratitude, when they reflected on their happy lot, sheltered from the bitter wind and driving sleet; and contrasted it with that of many miserable little beings, who were, no doubt, exposed, at that very moment, to the pitiless raging of the storm.

"Ah, mamma," said Ferdinand, a little boy of seven years old, "how I feel for those poor children who have no home to shelter them, and no fire to warm their cold hands. I often think of them, and it reminds me of the hymn I learned some time ago.

"Not more than others I deserve, Yet God hath given me more; For I have food whilst others starve, Or beg from door to door."

"I am glad to find that you can feel for others in distress, my boy," said Mrs. Bernard; "and hope you will each, my dear children, cultivate that benevolent affection called compassion, which enables us to enter into the distresses of others, and feel for them, in worse measure, as we do for ourselves. But we must not rest satisfied with only pitying their sorrows; as far as lies in our power, it is our duty to relieve them."

"That would be delightful indeed, mamma," said Ferdinand; "but what can such children as we are, do towards assisting our fellow creatures?—at least, such a little boy a I am. I thought it was only men and women, who could do good to others by their charity and benevolence."

His mother endeavoured to explain to him, that, although he might not at present be able to do any very extensive good to society, still the attempt to be useful, as far as lay in his power, would improve his own disposition; in which case his efforts would not be thrown away; and that, although he was so young, he might, nevertheless, be serviceable, in some degree, to his poorer neighbours. "And it would be very silly, my boy," added she, "to abstain from making the trial, merely because you could not do all the good you wished."

Ferdinand quite agreed with his mother, and the rest of the children cordially united in his wish to render themselves useful; but how to effect their purpose was the next consideration. Mrs. Bernard had taught her boys to net and knit, together with several other employments of the same kind. These occupations, she found, had the excellent effect of completely fixing their wandering attention, whilst she read to them, which she was daily in the practice of doing.

Ferdinand was the first to recollect that he could plat straw for a hat, which, he had no doubt, Emily and Louisa would afterwards sew together for him.

Louisa. Oh, yes, that we will most willingly, Ferdinand. But let us think what we can do, Emily: we might make a great many things, you know, because we can do all sorts of work.

Emily. Very true, Louisa: the chief difficulty will be to procure materials for the exercise of our abilities. I have several things that I shall not wear again; these, if mamma has no objection, might, I think, be converted to very useful purposes....