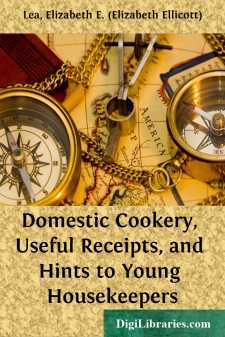 In boiling fresh meat, care is necessary to have the water boiling all the time it is in the pot; if the pot is not well scummed, the appearance of the meat will be spoiled.

Mutton and beef are preferred, by some, a little rare; but pork and veal should always be well done. A round of beef that is stuffed, will take more than three hours to boil, and if not stuffed, two hours or more, according to the size; slow boiling is the best. A leg of mutton requires from two to three hours boiling, according to the size; a fore-quarter from an hour to an hour and a half; a quarter of lamb, unless, very large, will boil in an hour. Veal and pork will take rather longer to boil than mutton.

All boiled fresh meat should have drawn butter poured over it, after it is dished, and be garnished with parsley.

The liquor that fresh meat, or poultry, is boiled in, should be saved, as an addition of vegetables, herbs, and dumplings make a nourishing soup of it.

A large turkey will take three hours to boil--a small one half that time; secure the legs to keep them from bursting out; turkeys should be blanched in warm milk and water; stuff them and rub their breasts with butter, flour a cloth and pin them in. A large chicken that is stuffed should boil an hour, and small ones half that time. The water should always boil before you put in your meat or poultry. When meat is frozen, soak it in cold water for several hours, and allow more time in the cooking.

To Boil a Turkey.

Have the turkey well cleaned and prepared for cooking, let it lay in salt and water a few minutes; fill it with bread and butter, seasoned with pepper, salt, parsley and thyme; secure the legs and wings, pin it up in a towel, have the water boiling, and put it in, put a little salt in the water; when half done, put in a little milk. A small turkey will boil in an hour and a quarter, a middle sized in two hours, and a large one in two and a half or three hours; they should boil moderately all the time; if fowls boil too fast, they break to pieces--half an hour will cook the liver and gizzard, which should be put round the turkey; when it is dished, have drawn butter, with an egg chopped and put in it, and a little parsley; oyster sauce, and celery sauce are good, with boiled turkey or chicken.

If the tongue is dry, let it soak for several hours, put it to boil in cold water, and keep it boiling slowly for two hours; but if it is just out of the pickle, the water should boil when it goes in.

Corned or pickled beef, or pork, require longer boiling than that which is dry; you can tell when it is done by the bones coming out easily. Pour drawn butter over it when dished.

To Boil a Ham.

A large ham should boil three or four hours very slowly; it should be put in cold water, and be kept covered during the whole process; a small ham will boil in two hours. All bacon requires much the same management,--and if you boil cabbage or greens with it, skim all the grease off the pot before you put them in....