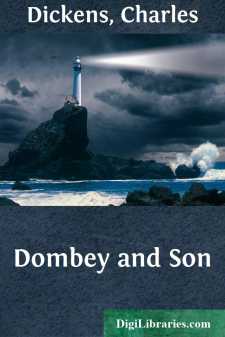 Dombey sat in the corner of the darkened room in the great arm-chair by the bedside, and Son lay tucked up warm in a little basket bedstead, carefully disposed on a low settee immediately in front of the fire and close to it, as if his constitution were analogous to that of a muffin, and it was essential to toast him brown while he was very new.

Dombey was about eight-and-forty years of age. Son about eight-and-forty minutes. Dombey was rather bald, rather red, and though a handsome well-made man, too stern and pompous in appearance, to be prepossessing. Son was very bald, and very red, and though (of course) an undeniably fine infant, somewhat crushed and spotty in his general effect, as yet. On the brow of Dombey, Time and his brother Care had set some marks, as on a tree that was to come down in good time—remorseless twins they are for striding through their human forests, notching as they go—while the countenance of Son was crossed with a thousand little creases, which the same deceitful Time would take delight in smoothing out and wearing away with the flat part of his scythe, as a preparation of the surface for his deeper operations.

Dombey, exulting in the long-looked-for event, jingled and jingled the heavy gold watch-chain that depended from below his trim blue coat, whereof the buttons sparkled phosphorescently in the feeble rays of the distant fire. Son, with his little fists curled up and clenched, seemed, in his feeble way, to be squaring at existence for having come upon him so unexpectedly.

'The House will once again, Mrs Dombey,' said Mr Dombey, 'be not only in name but in fact Dombey and Son;' and he added, in a tone of luxurious satisfaction, with his eyes half-closed as if he were reading the name in a device of flowers, and inhaling their fragrance at the same time; 'Dom-bey and Son!'

The words had such a softening influence, that he appended a term of endearment to Mrs Dombey's name (though not without some hesitation, as being a man but little used to that form of address): and said, 'Mrs Dombey, my—my dear.'

A transient flush of faint surprise overspread the sick lady's face as she raised her eyes towards him.

She feebly echoed, 'Of course,' or rather expressed it by the motion of her lips, and closed her eyes again.

'His father's name, Mrs Dombey, and his grandfather's! I wish his grandfather were alive this day! There is some inconvenience in the necessity of writing Junior,' said Mr Dombey, making a fictitious autograph on his knee; 'but it is merely of a private and personal complexion. It doesn't enter into the correspondence of the House. Its signature remains the same.' And again he said 'Dombey and Son, in exactly the same tone as before.

Those three words conveyed the one idea of Mr Dombey's life. The earth was made for Dombey and Son to trade in, and the sun and moon were made to give them light. Rivers and seas were formed to float their ships; rainbows gave them promise of fair weather; winds blew for or against their enterprises; stars and planets circled in their orbits, to preserve inviolate a system of which they were the centre....