Dolly and I A Story for Little Folks 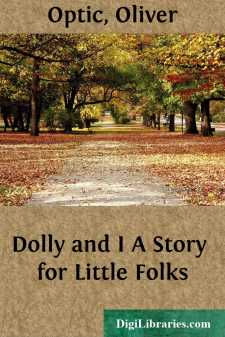 Do you know what envy means? I hope you have never felt it, for it is a very wicked feeling. It is being sorry when another has any good thing. Perhaps you will know better what the word means when you have read my story; and I hope it will help you to keep the feeling away from your own heart.

Not far from Mr. Lee's house, in Riverdale, lived a man by the name of Green. He was the agent of one of the factories in the village. Mr. Green had two little girls and three sons. The boys have nothing to do with my story, and for that reason I shall not say a great deal about them.

Katy, Mr. Green's older daughter, was ten years old. She was a pretty good girl, but she did not like to have others get good things, when she did not have any herself. If any person gave one of her brothers an apple, or an orange, she seemed to think she ought to have it.

When she was a baby, she used to cry for every thing she saw, and would give her parents no peace till they gave it to her. I am sorry to say they were sometimes very weak on this point, and gave her things which she ought not to have had, just to quiet her.

Her father and mother hoped, when she grew older, she would not want every thing that belonged to her brothers. If Charles had a plaything, Katy wanted it, and would cry till she got it. Very often, just to make her stop crying, her mother made poor Charley give up the thing.

But as Katy grew older, she seemed to want every thing that others had just as much as ever. She was now ten years old, and still she did not like to see others have any thing which she could not have. It is true she did not always say so, but she felt it just as much, and was very apt to be cross and sullen towards those whom she envied.

Nellie Green was not at all like her sister. She was only eight years old, but there was not a bit of envy in her. She would give a part, and often the whole, of her apples, oranges, candy, and playthings to her sister, and to her brothers. She liked to see them happy, and when Charley ate an apple, it tasted just as good to her as though she were eating it herself.

She was not selfish. She would always divide her good things with her friends. Did you ever see a little boy or a little girl eating an apple or some candy, and another little boy or girl standing by, and looking just as if he wanted some?

Nellie always gave her friends a part, and then she not only enjoyed what she ate herself, but she enjoyed what they ate. This is the way to make apples, oranges, and candy taste good.

One New Year's Day, Katy's aunt, after whom she was named, sent her a beautiful wax doll. It was a very pretty doll, and the little girl was the happiest child in Riverdale when the welcome present reached her.

There was another little girl in Riverdale who was almost if not quite as happy; and that was Nellie, her sister. It is true, the doll was not for her; she did not own any of it, and Katy would hardly let her touch it; but for all this, Nellie was pleased to see her sister so happy....