Doctor Rabbit and Brushtail the Fox 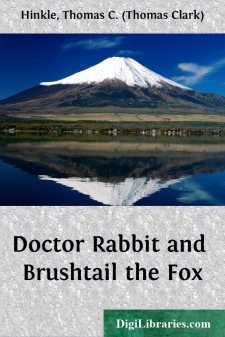 BRUSHTAIL THE FOX COMES TO THE BIG GREEN WOODS

Doctor Rabbit and Cheepy Chipmunk were sitting in Doctor Rabbit's front yard talking. They laughed a good deal as they talked, for it was a lovely morning in the beautiful Big Green Woods, and everyone felt happy.

Finally jolly Doctor Rabbit said he believed he would run over to the big sycamore tree to eat some more of the tender blue grass that grew there. It seemed as if he could eat there all day and all night, he said, because that grass was so good. Cheepy Chipmunk said he was getting hungry again too, and he guessed he would be going home to eat the fresh ear of corn he had found that morning.

Cheepy Chipmunk got up and was starting away, when Doctor Rabbit seized him and said in a low, frightened whisper that scared Cheepy half to death, "Come back and sit down and keep as still as anything. Look out there, will you!"

Very badly startled, Cheepy Chipmunk came back and sat down, and his eyes followed Doctor Rabbit's eyes. Cheepy saw an animal such as he had never seen before. This animal looked somewhat like a dog, but Cheepy knew right away he was no dog. He was not quite so large as Ki-yi Coyote, and was of a reddish-brown color, with a large, bushy tail. The animal was walking along under the trees not far away, and did not even look in the direction of Doctor Rabbit and little Cheepy Chipmunk.

But, although he could not tell why, Cheepy knew at once that that reddish-brown animal walking along out there under the trees was very dangerous to chipmunks and rabbits and any number of other little animals. Yes, sir, Cheepy Chipmunk was dreadfully frightened at once, for he was certain his life and the lives of Stubby Woodchuck, Chatty Red Squirrel and all his other friends were in great danger. But he had never seen such an animal before, so of course he did not know what it was.

"Keep right still!" Doctor Rabbit whispered in reply. "Just sit still. Yes, he has seen us—don't you fool yourself about that. But he knows well enough he can't catch us now. He's made up his mind he'll wait until he gets a better chance. But we won't let him know we see him. We'll have to try to deceive him at every turn. Yes, sir, Cheepy, we've got to watch out every minute now; we certainly have. He's one of the most cunning animals there is. I'm sorry he's come into our woods."

Cheepy Chipmunk was so frightened that his teeth were chattering as he asked, "Who is he?"

"He's Brushtail the Fox," Doctor Rabbit said. "I saw him a number of times in the woods up along the Deep River where I used to live. We'll see more of him—we can count on that. And now, Friend Cheepy, you must stay right here at my house until we are sure Brushtail has stopped watching us out of the corner of his eye."