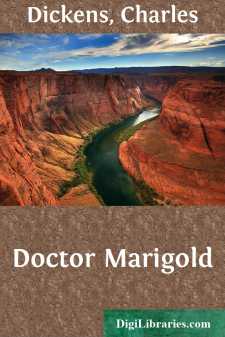 I am a Cheap Jack, and my own father’s name was Willum Marigold.  It was in his lifetime supposed by some that his name was William, but my own father always consistently said, No, it was Willum.  On which point I content myself with looking at the argument this way: If a man is not allowed to know his own name in a free country, how much is he allowed to know in a land of slavery?  As to looking at the argument through the medium of the Register, Willum Marigold come into the world before Registers come up much,—and went out of it too.  They wouldn’t have been greatly in his line neither, if they had chanced to come up before him.

I was born on the Queen’s highway, but it was the King’s at that time.  A doctor was fetched to my own mother by my own father, when it took place on a common; and in consequence of his being a very kind gentleman, and accepting no fee but a tea-tray, I was named Doctor, out of gratitude and compliment to him.  There you have me.  Doctor Marigold.

I am at present a middle-aged man of a broadish build, in cords, leggings, and a sleeved waistcoat the strings of which is always gone behind.  Repair them how you will, they go like fiddle-strings.  You have been to the theatre, and you have seen one of the wiolin-players screw up his wiolin, after listening to it as if it had been whispering the secret to him that it feared it was out of order, and then you have heard it snap.  That’s as exactly similar to my waistcoat as a waistcoat and a wiolin can be like one another.

I am partial to a white hat, and I like a shawl round my neck wore loose and easy.  Sitting down is my favourite posture.  If I have a taste in point of personal jewelry, it is mother-of-pearl buttons.  There you have me again, as large as life.

The doctor having accepted a tea-tray, you’ll guess that my father was a Cheap Jack before me.  You are right.  He was.  It was a pretty tray.  It represented a large lady going along a serpentining up-hill gravel-walk, to attend a little church.  Two swans had likewise come astray with the same intentions.  When I call her a large lady, I don’t mean in point of breadth, for there she fell below my views, but she more than made it up in heighth; her heighth and slimness was—in short THE heighth of both.

I often saw that tray, after I was the innocently smiling cause (or more likely screeching one) of the doctor’s standing it up on a table against the wall in his consulting-room.  Whenever my own father and mother were in that part of the country, I used to put my head (I have heard my own mother say it was flaxen curls at that time, though you wouldn’t know an old hearth-broom from it now till you come to the handle, and found it wasn’t me) in at the doctor’s door, and the doctor was always glad to see me, and said, “Aha, my brother practitioner!  Come in, little M.D.  How are your inclinations as to sixpence?”

You can’t go on for ever, you’ll find, nor yet could my father nor yet my mother.  If you don’t go off as a whole when you are about due, you’re liable to go off in part, and two to one your head’s the part.  Gradually my father went off his, and my mother went off hers.  It was in a harmless way, but it put out the family where I boarded them.  The old couple, though retired, got to be wholly and solely devoted to the Cheap Jack business, and were always selling the family off.  Whenever the cloth was laid for dinner, my father began rattling the plates and dishes, as we do in our line when we put up crockery for a bid, only he had lost the trick of it, and mostly let ’em drop and broke ’em.  As the old lady had been used to sit in the cart, and hand the articles out one by one to the old gentleman on the footboard to sell, just in the same way she handed him every item of the family’s property, and they disposed of it in their own imaginations from morning to night.  At last the old gentleman, lying bedridden in the same room with the old lady, cries out in the old patter, fluent, after having been silent for two days and nights: “Now here, my jolly companions every one,—which the Nightingale club in a village was held, At the sign of the Cabbage and Shears, Where the singers no doubt would have greatly excelled, But for want of taste, voices and ears,—now, here, my jolly companions, every one, is a working model of a used-up old Cheap Jack, without a tooth in his head, and with a pain in every bone: so like life that it would be just as good if it wasn’t better, just as bad if it wasn’t worse, and just as new if it wasn’t worn out.  Bid for the working model of the old Cheap Jack, who has drunk more gunpowder-tea with the ladies in his time than would blow the lid off a washerwoman’s copper, and carry it as many thousands of miles higher than the moon as naught nix naught, divided by the national debt, carry nothing to the poor-rates, three under, and two over.  Now, my hearts of oak and men of straw, what do you say for the lot?  Two shillings, a shilling, tenpence, eightpence, sixpence, fourpence.  Twopence?  Who said twopence?  The gentleman in the scarecrow’s hat?  I am ashamed of the gentleman in the scarecrow’s hat.  I really am ashamed of him for his want of public spirit.  Now I’ll tell you what I’ll do with you.  Come!  I’ll throw you in a working model of a old woman that was married to the old Cheap Jack so long ago that upon my word and honour it took place in Noah’s Ark, before the Unicorn could get in to forbid the banns by blowing a tune upon his horn.  There now!  Come!  What do you say for both?  I’ll tell you what I’ll do with you.  I don’t bear you malice for being so backward.  Here!  If you make me a bid that’ll only reflect a little credit on your town, I’ll throw you in a warming-pan for nothing, and lend you a toasting-fork for life.  Now come; what do you say after that splendid offer?  Say two pound, say thirty shillings, say a pound, say ten shillings, say five, say two and six.  You don’t say even two and six?  You say two and three?  No.  You shan’t have the lot for two and three.  I’d sooner give it to you, if you was good-looking enough.  Here!  Missis!  Chuck the old man and woman into the cart, put the horse to, and drive ’em away and bury ’em!”  Such were the last words of Willum Marigold, my own father, and they were carried out, by him and by his wife, my own mother, on one and the same day, as I ought to know, having followed as mourner....