Do and Dare - a Brave Boy's Fight for Fortune 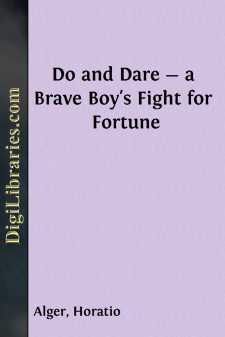 "If we could only keep the post office, mother, we should be all right," said Herbert Carr, as he and his mother sat together in the little sitting room of the plain cottage which the two had occupied ever since he was a boy of five.

"Yes, Herbert, but I am afraid there won't be much chance of it."

"Who would want to take it from you, mother?"

"Men are selfish, Herbert, and there is no office, however small, that is not sought after."

"What was the income last year?" inquired Herbert.

Mrs. Carr referred to a blank book lying on the table in which the post-office accounts were kept, and answered:

"I shouldn't think that would be much of an inducement to an able-bodied man, who could work at any business."

"Your father was glad to have it."

"Yes, mother, but he had lost an arm in the war, and could not engage in any business that required both hands."

"That is true, Herbert, but I am afraid there will be more than one who will be willing to relieve me of the duties. Old Mrs. Allen called at the office to-day, and told me she understood that there was a movement on foot to have Ebenezer Graham appointed."

"Yes; it is understood that the squire will throw his influence into the scale, and that will probably decide the matter."

"Then it's very mean of Squire Walsingham," said Herbert, indignantly. "He knows that you depend on the office for a living."

"Most men are selfish, my dear Herbert."

"But he was an old schoolfellow of father's, and it was as his substitute that father went to the war where he was wounded."

"True, Herbert, but I am afraid that consideration won't weigh much with John Walsingham."

"I have a great mind to go and see him, mother. Have you any objections?"

"I have no objections, but I am afraid it will do no good."

"Mr. Graham ought to be ashamed, with the profits of his store, to want the post office also. His store alone pays him handsomely."

"Mr. Graham is fond of money. He means to be a rich man."

"That is true enough. He is about the meanest man in town."

A few words are needed in explanation, though the conversation explains itself pretty well.

Herbert's father, returning from the war with the loss of an arm, was fortunate enough to receive the appointment of postmaster, and thus earn a small, but, with strict economy, adequate income, until a fever terminated his earthly career at middle age. Mr. Graham was a rival applicant for the office, but Mr. Carr's services in the war were thought to give him superior claims, and he secured it. During the month that had elapsed since his death, Mrs. Carr had carried on the post office under a temporary appointment. She was a woman of good business capacity, and already familiar with the duties of the office, having assisted her husband, especially during his sickness, when nearly the whole work devolved upon her. Most of the village people were in favor of having her retained, but the local influence of Squire Walsingham and his nephew was so great that a petition in favor of the latter secured numerous signatures, and was already on file at the department in Washington, and backed by the congressman of the district, who was a political friend of the squire....