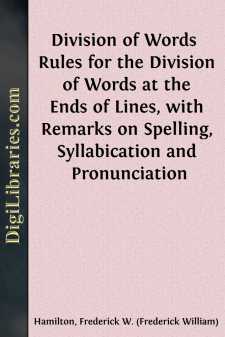 The idea that there is one right way to combine the letters representing a certain sound or group of sounds, that is a word, and that all other ways are wrong and little short of shameful is a comparatively new idea among us. The English speaking folk held down to a comparatively recent time that any group of letters which approximately represented the sound was amply sufficient as a symbol of the word. This sort of phonetic spelling was commonly followed, and followed with great freedom. No obligation was recognized to be consistent. In ordinary writing, such as letters and the like, it is not unusual to find the same word spelled in a variety of ways in the same document.

The last century has brought about an attempt to standardize spelling into conventional forms any departure from which is regarded as highly derogatory to the writer. In many cases these forms are fixed arbitrarily, and in some there is even now disagreement among the highest authorities. These difficulties and disagreements have two reasons: First, English is a composite language, drawn from many sources and at many periods; hence purely philological and etymological influences intervene, sometimes with marked results, while there is a difference of opinion as to how far these influences ought to prevail. Second, the English language uses an alphabet which fits it very badly. Many letters have to do duty for the expression of several sounds, and sometimes several of them have nearly or quite the same sound. For example, there are a number of distinct sounds of a, i, and o while g is sometimes indistinguishable from j and c from k. This is not always a matter of modification of sounds by the sounds of other letters combined with them. One has to learn how to pronounce cough, dough, enough, and plough, the ough having four distinct sounds in these four words. Each one of these sounds, by the way, could be exactly as well represented by another combination of letters which would be unmistakable, viz., coff, doe, enuff, and plow. It is impossible to tell except by the context either the pronunciation or the meaning of bow. If the ow is pronounced as in low, it means a weapon. If the ow is pronounced as in cow it may mean either an obeisance or the front end of a boat.

This standardization of spelling is unfortunately not quite complete, although nearly so. Concerning the vast majority of the words in the English language there is no difference of opinion. A few words are differently spelled by different authorities. There are seven of these authorities of the first rank, three English, Stormonth, the Imperial Dictionary, and the Oxford Dictionary; and four American, Webster's International, Worcester, the Century Dictionary, and the Standard Dictionary. American printers may ordinarily disregard the English authorities.

Any one of the four American authorities may be safely followed. In cases where two spellings are given in the dictionary consulted, take the first one. Ordinarily a printing office adopts one of the great authorities as a standard and conforms the office style to it. All office copy will follow it and all errors in copy from outside will be corrected by it. Spellings differing from it will be regarded as errors, even though supported by other authorities.

This rule, however, is subject to one very important exception. The author has an unquestionable right to choose his own dictionary or to use any spelling for which there is any authority, English or American. If he has his own ideas on the subject of spelling he should be very careful that his manuscript is correctly spelled according to his ideas, and clearly written or typed. He should also indicate on the manuscript the authority he wishes used in correcting the spelling in case of mistakes or illegible passages....