Dishes & Beverages of the Old South 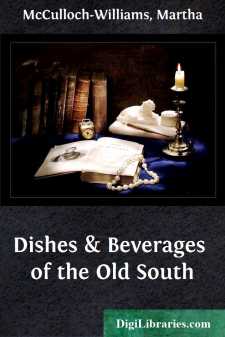 "Let me cook the dinners of a nation, and I shall not care who makes its laws." Women, if they did but know it, might well thus paraphrase a famous saying. Proper dinners mean so much—good blood, good health, good judgment, good conduct. The fact makes tragic a truth too little regarded; namely, that while bad cooking can ruin the very best of raw foodstuffs, all the arts of all the cooks in the world can do no more than palliate things stale, flat and unprofitable. To buy such things is waste, instead of economy. Food must satisfy the palate else it will never truly satisfy the stomach. An unsatisfied stomach, or one overworked by having to wrestle with food which has bulk out of all proportion to flavor, too often makes its vengeful protest in dyspepsia. It is said underdone mutton cost Napoleon the battle of Leipsic, and eventually his crown. I wonder, now and then, if the prevalence of divorce has any connection with the decline of home cooking?

A far cry, and heretical, do you say, gentle reader? Not so far after all—these be sociologic days. I am but leading up to the theory with facts behind it, that it was through being the best fed people in the world, we of the South Country were able to put up the best fight in history, and after the ravages and ruin of civil war, come again to our own. We might have been utterly crushed but for our proud and pampered stomachs, which in turn gave the bone, brain and brawn for the conquests of peace. So here's to our Mammys—God bless them! God rest them! This imperfect chronicle of the nurture wherewith they fed us is inscribed with love to their memory.

Almost my earliest memory is of Mammy's kitchen. Permission to loiter there was a Reward of Merit—a sort of domestic Victoria Cross. If, when company came to spend the day, I made my manners prettily, I might see all the delightful hurley-burley of dinner-cooking. My seat was the biscuit block, a section of tree-trunk at least three feet across, and waist-high. Mammy set me upon it, but first covered it with her clean apron—it was almost the only use she ever made of the apron. The block stood well out of the way—next the meal barrel in the corner behind the door, and hard by the Short Shelf, sacred to cake and piemaking, as the Long Shelf beneath the window was given over to the three water buckets—cedar with brass hoops always shining like gold—the piggin, also of cedar, the corn-bread tray, and the cup-noggin. Above, the log wall bristled with knives of varying edge, stuck in the cracks; with nails whereon hung flesh-forks, spoons, ladles, skimmers. These were for the most part hand-wrought, by the local blacksmith. The forks in particular were of a classic grace—so much so that when, in looking through my big sister's mythology I came upon a picture of Neptune with his trident, I called it his flesh-fork, and asked if he were about to take up meat with it, from the waves boiling about his feet.

The kitchen proper would give Domestic Science heart failure, yet it must have been altogether sanitary....