Dinosaurs With Special Reference to the American Museum Collections 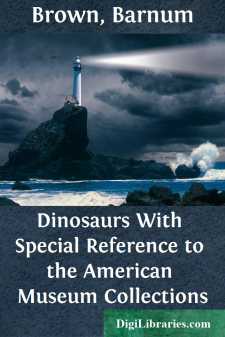 Chapter I. THE AGE OF REPTILES. Its Antiquity, Duration and Significance in Geologic History.

Palæontology deals with the History of Life. Its time is measured in geologic epochs and periods, in millions of years instead of centuries. Man, by this measure, is but a creature of yesterday—his "forty centuries of civilization" but a passing episode. It is by no means easy for us to adjust our perspective to the immensely long spaces of time involved in geological evolution. We are apt to think of all these extinct animals merely as prehistoric—to imagine them all living at the same time and contending with our cave-dwelling ancestors for the mastery of the earth.

In order to understand the place of the Dinosaurs in world-history, we must first get some idea of the length of geologic periods and the immense space of time separating one extinct fauna from another.

The Age of Man. Prehistoric time, as it is commonly understood, is the time when barbaric and savage tribes of men inhabited the world but before civilization began, and earlier than the written records on which history is based. This corresponds roughly to the Pleistocene epoch of geology; it is included along with the much shorter time during which civilization has existed, in the latest and shortest of the geological periods, the Quaternary. It was the age of the mammoth and the mastodon, the megatherium and Irish deer and of other quadrupeds large and small which are now extinct; but most of its animals were the same species as now exist. It was marked by the great episode of the Ice Age, when considerable parts of the earth's surface were buried under immense accumulations of ice, remnants of which are still with us in the icy covering of Greenland and Antarctica.

The Age of Mammals. Before this period was a very much longer one—at least thirty times as long—during which modern quadrupeds were slowly evolving from small and primitive ancestors into their present variety of form and size. This is the Tertiary Period or Age of Mammals. Through this long period we can trace step by step the successive stages through which the ancestors of horses, camels, elephants, rhinoceroses, etc., were gradually converted into their present form in adaptation to their various habits and environment. And with them were slowly evolved various kinds of quadrupeds whose descendants do not now exist, the Titanotheres, Elotheres, Oreodonts, etc., extinct races which have not survived to our time. Man, as such, had not yet come into existence, nor are we able to trace any direct and complete line of ancestry among the fossil species known to us; but his collateral ancestors were represented by the fossil species of monkeys and lemurs of the Tertiary period.