Dikes and Ditches Young America in Holland and Belguim 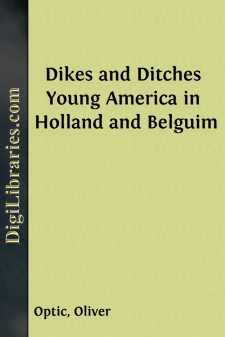 THE PROFESSOR AND THE CAPTAIN.

The Young America, with every rag of canvas set, including studding-sails alow and aloft, rolled and pitched gracefully on the long swells of the German Ocean. The wind was very light from the north-west, and there was hardly enough of it to give the ship steerage-way. A mile off, on her starboard bow, was the Josephine, beclouded in the quantity of sail she carried, but hardly leaving a wake in the blue waters behind her. The hummocks and the low land of the shores of Holland and Belgium were in sight; but, with the present breeze, there was but little hope of reaching the mouth of the Scheldt that night, though it was hardly twenty miles distant.

The regular course of instruction was in progress in both vessels, the starboard watch of each being in the steerage, attending to their studies, while the port watch were on deck, in charge of the sailing department. Mr. Lowington paced the deck of the ship, and, with the habit of an old sailor, frequently cast his eyes aloft to see what sails were drawing. Occasionally, from a custom begotten of his solicitude for his charge, he glanced at the Josephine.

The squadron did not make even a mile an hour; and when the watch was changed, at four o'clock, there was not a breath of air to ruffle the glassy waves. The ship rolled and pitched on the swells, and the sails slapped against the masts and rigging under the effect of her motion. The young seamen on deck, without being in a hurry, were annoyed and vexed, as all sailors are in a calm. They partook of the heaviness of the scene, and gaped and yawned, from mere inactivity, and the want of something to occupy their minds.

The calm was only the prelude of a lively scene. To the westward, beyond the low coast line dimly seen in the distance, was a dense mass of black clouds, rising rapidly towards the zenith. Low, muttering, muffled thunder came over the sea. The sun went into the inky veil; and then the lightnings flashed, faintly at first, but glaring brighter and brighter as the darkness increased.

Mr. Lowington still paced the deck; but, instead of looking aloft now, he cast frequent glances at the officer of the deck, who was watching the dense black clouds. The principal said nothing; for, whatever views he had in regard to the working of the ship, it was his policy never to interfere until absolutely necessary. The officers were encouraged to do their own thinking, and were expected to take all necessary precautions for the safety of the ship at the right time. The second lieutenant was in charge of the deck, and as yet he had taken no step which indicated that he was conscious of any peril.

"Mr. Lavender," said he, at last, when the principal's movements had begun to be a little nervous.

The second midshipman, who was the third officer in rank on duty, stepped up to the lieutenant and touched his cap.

"Tell the captain there is a shower coming up, and that the clouds look squally," added Mr. Ellis, the officer of the deck.

Lavender touched his cap, and went down into the steerage, where the captain was reciting his French lesson to Professor Badois....