Digging for Gold Adventures in California 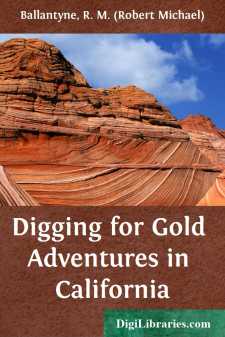 Begins with Differences of Opinion.

If ever there was a man in this world who was passionately fond of painting and cut out for a painter, that man was Frank Allfrey; but fate, in the form of an old uncle, had decided that Frank should not follow the bent of his inclinations.

We introduce our hero to the reader at the interesting age of eighteen, but, long before that period of life, he had shown the powerful leaning of his spirit. All his school-books were covered with heads of dogs, horses, and portraits of his companions. Most of his story-books were illustrated with coloured engravings, the colouring of which had been the work of his busy hand, and the walls of his nursery were decorated with cartoons, done in charcoal, which partial friends of the family sometimes declared were worthy of Raphael.

At the age of thirteen, his uncle—for the poor fellow was an orphan—asked him one day what he would like to be. This was an extraordinary condescension on the part of Mr Allfrey, senior, who was a grim, hard-featured man, with little or no soul to speak of, and with an enormously large ill-favoured body. The boy, although taken by surprise—for his uncle seldom addressed him on any subject,—answered promptly, “I’d like to be an artist, sir.”

This was all that was said at the time, and as it is the only conversation which is certainly known to have taken place between the uncle and nephew during the early youth of the latter, we have ventured, at the risk of being tedious, to give the whole of it.

Frank was one of those unfortunates who are styled “neglected boys.” He was naturally sharp-witted, active in mind and body, good-tempered, and well disposed, but disinclined to study, and fond of physical exertion. He might have been a great man had he been looked after in youth, but no one looked after him. He was an infant when his father and mother died and left him to the care of his uncle, who cared not for him but left him to care for himself, having, as he conceived, done his duty towards him when he had supplied him with food, clothing, and lodging, and paid his school fees. No blame, therefore, to poor Frank that he grew up a half-educated youth, without fixed habits of study or thought, and with little capacity for close or prolonged mental exertion.

Mr Allfrey entertained the ridiculous idea that there were only three grand objects of ambition in life, namely, to work, to eat and drink, and to sleep. At least, if he did not say in definite terms that such was his belief, he undoubtedly acted as though it were. His mind appeared to revolve in a sort of small circle. He worked in order that he might eat and drink; he ate and drank that he might be strengthened for work, and he slept in order to recruit his energies that he might be enabled to work for the purposes of eating and drinking. He was a species of self-blinded human-horse that walked the everlasting round of a business-mill of his own creating. It is almost unnecessary to add that he was selfish to the back-bone, and that the only individual who did not see the fact was himself....