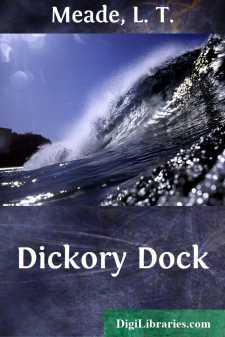 Of course there was a baby in the case—a baby and mongrel dog, and a little boy and girl.  They baby was small, and not particularly fair, but it had round limbs and a dimple or two, and a soft, half-pathetic, half-doggy look in its blue eyes, and the usual knack, which most helpless little babies have, of twining itself round the hearts of those who took care of it.

The caretakers of this baby were the two children and the dog.  Of course a woman, who went by the name of nurse, did duty somewhere in the background; she washed the baby and dressed it in the morning, and she undressed it at night, and she prepared food for it; but the caretakers who called up smiles to the little white face, who caused the baby to show that enticing little dimple which it had in one of its cheeks, who made that strange, sweet, half-pathetic, half-humorous look come into its eyes, were the children and the dog.  The baby had a sad history; it had entered the world with sorrow.  Its mother had died at its birth, and the little wee orphan creature had been brought away almost directly to an uncle’s house.

‘We must do it, wife,’ said Mr Franklin; ‘there’s poor John died two months back, and now there’s his widow following him, poor creature, and no one to look after that wee mite of a babe.  We must have it here, it’s our plain duty, and I don’t suppose one extra mouth to feed can make much difference.’

‘That’s all you men know,’ replied Mrs Franklin, who was a very tall, thin, fretful-looking woman.  ‘No difference indeed!  A baby make no difference!  And who’s to tend on the lodgers, and bring in the grist to the mill, if all my time, day and night, is taken up minding the baby!’

‘Well, well,’ said Mr Franklin.  He was as peaceable as his wife was the reverse.  He did not want the baby, but neither did he wish to send poor John’s child to the workhouse.

‘You must make the best of it, wife,’ he said.  ‘Martha’ll help you, and I daresay Peter and Flossy will take a turn in looking after the young ’un.’

Mrs Franklin said no more; she went up-stairs, and got a certain disused attic into some sort of order.  The attic was far away from the rest of the house; it was the top story of a wing, which had been added on to the tall, ramshackle old house.  In some of the rooms underneath, the Franklin family themselves slept; in others they lived, and in others they cooked.  The rest of the house, therefore, was free for the accommodation of lodgers.

Mrs Franklin earned the family bread by taking in lodgers.  She was far more active than her husband, who had a very small clerkship in the city; without her aid the children, Peter and Flossy, could scarcely have lived, but by dint of toiling from morning to night, of saving every penny, of turning and re-turning worn-out clothes, and scrubbing and cooking and brushing and cleaning, Mrs Franklin contrived to make two ends meet.  Her lodgers said that the rooms they occupied were clean and neat, that their food was well cooked, and above all things that the house was quiet.  Therefore they stayed on; year after year the same people lived in the parlours, and occupied the genteel drawing-room floor; and hard as her lot was, Mrs Franklin considered herself a lucky woman, and her neighbours often envied her.

The house where the Franklins lived was in one of those remote old-world half-forgotten squares which are to be found at the back of Bloomsbury.  In their day these squares had seen fashion and life, but the gay world had long, long ago passed them by and forgotten them, and in consequence, although the houses were large and commodious, the rents were low....