Dick o' the Fens A Tale of the Great East Swamp 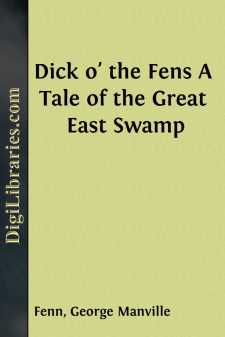 Dick Winthorpe—christened Richard by order of his father at the Hall—sat on the top of the big post by the wheelwright’s door.

It was not a comfortable seat, and he could only keep his place by twisting his legs round and holding on; but as there was a spice of difficulty in the task, Dick chose it, and sat there opposite Tom Tallington—christened Thomas at the wish of his mother, Farmer Tallington’s wife, of Grimsey, the fen island under the old dyke.

Tom Tallington was seated upon one side of a rough punt, turned up to keep the rain from filling it, and as he was not obliged to hold on with his legs he kept swinging them to and fro.

It was not a pleasant place for either of the lads, for in front of them was a ring of fire where, upon the ground, burned and crackled and fumed a quantity of short wood, which was replenished from time to time by Mark Hickathrift, the wheelwright, and his lad Jacob.

At the first glance it seemed as if the wheelwright was amusing himself by making a round bonfire of scraps, whose blue reek rose in the country air, and was driven every now and then by the wind over the boys, who coughed and sneezed and grumbled, but did not attempt to move, for there was, to them, an interesting feat about to be performed by the wheelwright—to wit, the fitting of the red-hot roughly-made iron tire in the wood fire upon the still more roughly-made wheel, which had been fitted with a few new spokes and a fresh felloe, while Farmer Tallington’s heavy tumbril-cart stood close by, like a cripple supported on a crutch, waiting for its iron-shod circular limb.

“Yes, it is,” said Tom Tallington. “You can see it all red. Why don’t you put it on cold, instead of burning the wood?”

The wheelwright chuckled and put on some more wood, which crackled and roared as the wind came with a rush off the great fen, making the scattered patches of dry reeds bend and whisper and rustle, and rise and fall, looking in the distance of the grey, black, solemn expanse like the waves of the sea on a breezy day.

“Thou shouldstna sit that side then,” said the wheelwright.

“Hoy, Dave!” shouted Dick Winthorpe. “Hi, there: Chip, Chip, Chip!” he cried, trying to pat his leg with one hand, the consequence being that he overbalanced himself and dropped off the post, but only to stay down and caress a little black-and-white dog, which trotted up wagging its stump of a tail, and then beginning to growl and snarl, twitching its ears, as another dog appeared on the scene—a long, lank, rough-haired, steely-grey fellow, with a pointed nose, which, with his lean flanks, gave him the aspect of an animal of a vain disposition, who had tried to look like a greyhound, and failed....