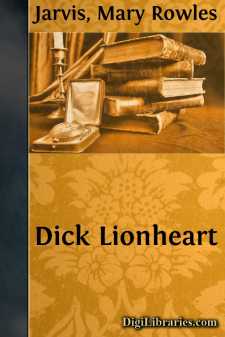 CHAPTER I. SOMETHING TO LOVE.

"There, take that, and be off with you! And no dawdling, mind. It's ten minutes late, and you'll have to step it to be there by one. That's your dinner, and more than you deserve."

Dick Crosby took the one thick slice she offered, slipped the handle of the tin of tea on his arm, and with the big basin, tied up in a blue handkerchief, in his other hand, marched off in the direction of the tin works, while slatternly Mrs. Fowley went back into her cottage.

"Only bread and dripping again," he muttered, "while they've all got cooked dinner. How good it smells! She might have given me at least some taters and gravy. And I'm so thirsty. Perhaps if he is in a good mood I shall get a drink of tea. I s'pose nobody would know if I helped myself in Fell Lane, but I can't be Lionheart and do mean things, teacher said. Only if ever I grow up and have a little chap in my house what's only a 'cumbrance, he shall have the same dinner as all the rest!"

Taking frugal bites at the bread and dripping, to make it last as long as possible, Dick hurried on to the Works, whose tall chimney sent out clouds of black smoke.

The hooter sounded for the dinner hour as he reached the last turning, and a crowd of men and boys passed him, and one of the boys called out, "Hulloa, Slavey! How much a day for scrubbing floors and minding babbies?"

Dick's face flushed hotly, and the small hard hand that held the dinner trembled with a passionate desire to fight the tormentors, among whom Tim Fowley, his cousin, laughed loudest.

But his uncle was standing at the gate, and he had to hurry up with the dinner.

His reward for good speed was a surly word from the man and a box on the ear, that made his head reel.

"Take that for dawdling, and be off with you!"

"Oi don't think he deserved that, mate," said the cheery voice of Paddy the fireman, as he passed down the yard. "Shure, ye can see by the sweat of his brow he's been hurrying."

The man turned sulkily away, and Paddy whispered, "Come along of me, Dick, I've got somethin' to show you—somethin' you'll like almost as much as engines."

Dick followed eagerly, feeling that he had honestly earned ten minutes of dinner hour for his own.

It was hot in the great boiler house, where the stoke holes were glowing with fiery heat, and the throb of the machinery went on, like giant's music, all the time.

Paddy had worked there for years, and had found out Dick's intense love for engines and his secret ambition, some day, to be a stoker, too. And the Irishman's warm heart had often been made angry by the Fowleys' unkind treatment of the boy.

To-day he had a bacon sandwich and a drink of coffee to spare, and when Dick had gratefully disposed of these he took him to a warm corner behind the door, and showed him an old basket.

On the straw inside slept a tiny black and tan terrier, that as yet could hardly see. Dick was on his knees in a moment, fondling the little bundle, and crying, "Oh, Paddy, is he yours? What a dear little doggie."