Diary of Anna Green Winslow A Boston School Girl of 1771 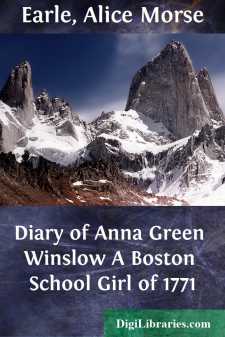 IN the year 1770, a bright little girl ten years of age, Anna Green Winslow, was sent from her far away home in Nova Scotia to Boston, the birthplace of her parents, to be "finished" at Boston schools by Boston teachers. She wrote, with evident eagerness and loving care, for the edification of her parents and her own practice in penmanship, this interesting and quaint diary, which forms a most sprightly record, not only of the life of a young girl at that time, but of the prim and narrow round of daily occurrences in provincial Boston. It thus assumes a positive value as an historical picture of the domestic life of that day; a value of which the little girl who wrote it, or her kinsfolk who affectionately preserved it to our own day, never could have dreamed. To many New England families it is specially interesting as a complete rendering, a perfect presentment, of the childish life of their great grandmothers, her companions.

It is an even chance which ruling thought in the clever little writer, a love of religion or a love of dress, shows most plainly its influence on this diary. On the whole, I think that youthful vanity, albeit of a very natural and innocent sort, is more pervasive of the pages. And it is fortunate that this is the case; for, from the frankly frivolous though far from self-conscious entries we gain a very exact notion, a very valuable picture, of the dress of a young girl at that day. We know all the details of her toilet, from the "pompedore" shoes and the shifts (which she had never worn till she lived in Boston), to the absurd and top-heavy head-decoration of "black feathers, my past comb & all my past garnet marquasett and jet pins, together with my silver plume." If this fantastic assemblage of ornament were set upon the "Heddus roll," so graphically described, it is easy to understand the denunciations of the time upon women's headgear. In no contemporary record or account, no matter who the writer, can be found such a vivacious and witty description of the modish hairdressing of that day as in the pages of this diary.

But there are many entries in the journal of this vain little Puritan devotee to show an almost equal attention to religion; records of sermons which she had heard, and of religious conversations in which she had taken a self-possessed part; and her frequent use of Biblical expressions and comparisons shows that she also remembered fully what she read. Her ambitious theological sermon-notes were evidently somewhat curtailed by the sensible advice of the aunt with whom she resided, who thereby checked also the consequent injudicious praise of her pastor, the Old South minister. For Anna and her kinsfolk were of the congregation of the Old South church; and this diary is in effect a record of the life of Old South church attendants. Many were what Anna terms "sisters of the Old South," and nine tenths of the names of her companions and friends may be found on the baptismal and membership records of that church....