Dialogues in French and English 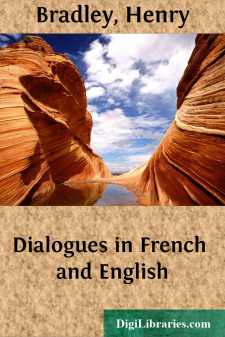 The work now for the first time reprinted from Caxton’s original edition has been preserved in three copies. One of these is in the Library of Ripon Cathedral, another in the Spencer Library, now at Manchester, and the third at Bamborough Castle. A small fragment, consisting of pp. 17-18 and 27-28, is in the Bodleian Library. The text of the present edition is taken from the Ripon copy. I have not had an opportunity of seeing this myself; but a type-written transcript was supplied to me by Mr. John Whitham, Chapter Clerk of Ripon Cathedral, and the proofs were collated with the Ripon book by the Rev. Dr. Fowler, Vice-Principal of Bishop Hatfield’s Hall, Durham, who was kind enough to re-examine every passage in which I suspected a possible inaccuracy. It is therefore reasonable to hope that the present reprint will be found to be a strictly faithful representation of the original edition.

The earlier bibliographers gave to the book the entirely inappropriate title of ‘Instructions for Travellers.’ Mr. Blades is nearer the mark in calling it ‘A Vocabulary in French and English,’ but, as it consists chiefly of a collection of colloquial phrases and dialogues, the designation adopted in the present edition appears to be preferable. As in other printed works of the same period, there is no title-page in the original edition, so that a modern editor is at liberty to give to the book whatever name may most accurately describe its character. The name of Caxton does not occur in the colophon, which merely states that the work was printed at Westminster; but the authorship is sufficiently certain from internal evidence. On the ground of the form of type employed, Mr. Blades inferred that the book was printed about 1483. However this may be, there are, as will be shown, decisive reasons for believing that it was written at a much earlier period.

A fact which has hitherto escaped notice is that Caxton’s book is essentially an adaptation of a collection of phrases and dialogues in French and Flemish, of which an edition was published by Michelant in 1875, from a MS. in the Bibliothèque Nationale.

The text of Caxton’s original cannot, indeed, have been precisely identical with that of the MS. used by Michelant. It contained many passages which are wanting in the Paris MS., and in some instances had obviously preferable readings. Caxton’s English sentences are very often servile translations from the Flemish, and he sometimes falls into the use of Flemish words and idioms in such a way as to show that his long residence abroad had impaired his familiarity with his native language. The French respaulme cet hanap, for instance, is rendered by ‘spoylle the cup.’ Of course the English verb spoylle never meant ‘to rinse’; Caxton was misled by the sound of the Flemish spoel. Caxton’s ‘after the house,’ as a translation of aual la maison (throughout the house), is explicable only by a reference to the Flemish version, which has achter huse....