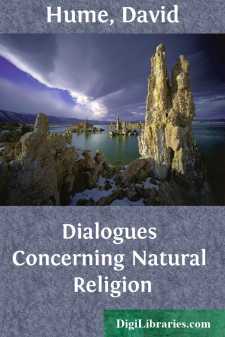 After I joined the company, whom I found sitting in CLEANTHES's library, DEMEA paid CLEANTHES some compliments on the great care which he took of my education, and on his unwearied perseverance and constancy in all his friendships. The father of PAMPHILUS, said he, was your intimate friend: The son is your pupil; and may indeed be regarded as your adopted son, were we to judge by the pains which you bestow in conveying to him every useful branch of literature and science. You are no more wanting, I am persuaded, in prudence, than in industry. I shall, therefore, communicate to you a maxim, which I have observed with regard to my own children, that I may learn how far it agrees with your practice. The method I follow in their education is founded on the saying of an ancient, "That students of philosophy ought first to learn logics, then ethics, next physics, last of all the nature of the gods." [Chrysippus apud Plut: de repug: Stoicorum] This science of natural theology, according to him, being the most profound and abstruse of any, required the maturest judgement in its students; and none but a mind enriched with all the other sciences, can safely be entrusted with it.

Are you so late, says PHILO, in teaching your children the principles of religion? Is there no danger of their neglecting, or rejecting altogether those opinions of which they have heard so little during the whole course of their education? It is only as a science, replied DEMEA, subjected to human reasoning and disputation, that I postpone the study of Natural Theology. To season their minds with early piety, is my chief care; and by continual precept and instruction, and I hope too by example, I imprint deeply on their tender minds an habitual reverence for all the principles of religion. While they pass through every other science, I still remark the uncertainty of each part; the eternal disputations of men; the obscurity of all philosophy; and the strange, ridiculous conclusions, which some of the greatest geniuses have derived from the principles of mere human reason. Having thus tamed their mind to a proper submission and self-diffidence, I have no longer any scruple of opening to them the greatest mysteries of religion; nor apprehend any danger from that assuming arrogance of philosophy, which may lead them to reject the most established doctrines and opinions.

Your precaution, says PHILO, of seasoning your children's minds early with piety, is certainly very reasonable; and no more than is requisite in this profane and irreligious age. But what I chiefly admire in your plan of education, is your method of drawing advantage from the very principles of philosophy and learning, which, by inspiring pride and self-sufficiency, have commonly, in all ages, been found so destructive to the principles of religion. The vulgar, indeed, we may remark, who are unacquainted with science and profound inquiry, observing the endless disputes of the learned, have commonly a thorough contempt for philosophy; and rivet themselves the faster, by that means, in the great points of theology which have been taught them....