Devotions Upon Emergent Occasions Together with Death's Duel 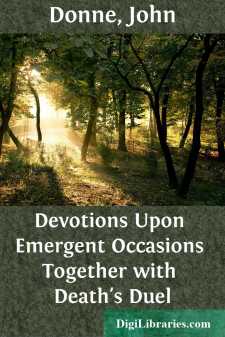 THE LIFE OF DR. JOHN DONNE

(Taken from the life by Izaak Walton).

Master John Donne was born in London, in the year 1573, of good and virtuous parents: and, though his own learning and other multiplied merits may justly appear sufficient to dignify both himself and his posterity, yet the reader may be pleased to know that his father was masculinely and lineally descended from a very ancient family in Wales, where many of his name now live, that deserve and have great reputation in that country.

By his mother he was descended of the family of the famous and learned Sir Thomas More, sometime Lord Chancellor of England: as also, from that worthy and laborious Judge Rastall, who left posterity the vast Statutes of the Law of this nation most exactly abridged.

He had his first breeding in his father's house, where a private tutor had the care of him, until the tenth year of his age; and, in his eleventh year, was sent to the University of Oxford, having at that time a good command both of the French and Latin tongue. This, and some other of his remarkable abilities, made one then give this censure of him: That this age had brought forth another Picus Mirandula; of whom story says, that he was rather born than made wise by study.

There he remained for some years in Hart Hall, having, for the advancement of his studies, tutors of several sciences to attend and instruct him, till time made him capable, and his learning expressed in public exercises, declared him worthy, to receive his first degree in the schools, which he forbore by advice from his friends, who, being for their religion of the Romish persuasion, were conscionably averse to some parts of the oath that is always tendered at those times, and not to be refused by those that expect the titulary honour of their studies.

About the fourteenth year of his age he was transplanted from Oxford to Cambridge, where, that he might receive nourishment from both soils, he staid till his seventeenth year; all which time he was a most laborious student, often changing his studies, but endeavouring to take no degree, for the reasons formerly mentioned.

About the seventeenth year of his age he was removed to London, and then admitted into Lincoln's Inn, with an intent to study the law, where he gave great testimonies of his wit, his learning, and of his improvement in that profession; which never served him for other use than an ornament and self-satisfaction.

His father died before his admission into this society; and, being a merchant, left him his portion in money. (It was £3,000.) His mother, and those to whose care he was committed, were watchful to improve his knowledge, and to that end appointed him tutors both in the mathematics, and in all the other liberal sciences, to attend him. But, with these arts, they were advised to instil into him particular principles of the Romish Church; of which those tutors professed, though secretly, themselves to be members.

They had almost obliged him to their faith; having for their advantage, besides many opportunities, the example of his dear and pious parents, which was a most powerful persuasion, and did work much upon him, as he professeth in his preface to his "Pseudo-Martyr," a book of which the reader shall have some account in what follows....