Devon Boys A Tale of the North Shore 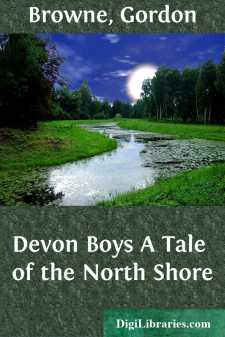 Bigley Uggleston always said that it was in 1753, because he vowed that was the hot year when we had gone home for the midsummer holidays from Barnstaple Grammar-school.

Bob Chowne stuck out, as he always would when he knew he was wrong, that it was in 1755, and when I asked him why he put it then, he held up his left hand with his fingers and thumb spread out, which was always his way, and then pointing with the first finger of his right, he said:

“It was in 1755, because that was the year when the French war broke out.”

Then he pushed down his thumb, and went on:

“And because that was the year we had a bonfire in June, because Doctor Stacey was married for the third time, and we burned all the birches.”

Then he pushed down his first finger.

“And because that was the year we had an extra week’s holiday.”

Down went his second finger.

“And because that was the year the Spanish galleon was wrecked on Jagger Rock.”

Down went the third finger.

“And because that was the year your father bought the whole of Slatey Gap.”

Down went the fourth finger, so that his open hand had become a clenched fist held up, and then in his regular old pugnacious way he looked round the room as if he wanted to hit somebody as he snarled out:

I could have said so, but what’s the use of quarrelling with a fellow who can’t help being obstinate. It was in his nature, and no end of times I’ve known that when my old school-fellow was snaggy and nasty and quarrelsome with me, he’d have fought like a Trojan on my side against half the school.

But that fourth finger of Bob Chowne’s settled it as to the time, for it was not in 1755 but in 1752, for there’s the date on the old parchment, which sets forth how the whole of the Gap from the foreshore right up the little river for five hundred yards inland, and the whole of the steep cliff slope and precipice, each side, to the very top, was conveyed to my father, Arthur John Duncan, of Oak Cottage, Wistabay, lieutenant and commander in the Royal Navy of His Most Gracious Majesty King George the Second.

It doesn’t matter in the least when it was, only I may as well say when, any more than it does that everybody who knew my father, including Doctor Chowne of Ripplemouth, said he must be mad to go and buy, at the sale of Squire Allworth’s estate, a wild chasm of a place, all slaty rock and limestone crag and rift and hollow, with a patch of scraggy oak-trees here, some furze and heath there, and barely enough grass to feed half a dozen sheep, and that, even if it was cheap, because no one else would buy it, he was throwing good money away.

But I didn’t think so that hot midsummer afternoon when I was back home, and had set out to explore the place as I had never explored it before.

That was not saying much, for I pretty well knew the spot by heart, but it was my father’s now—“ours.”

We three boys had ridden home together the day before, sitting on our boxes in Teggley Grey’s cart, for he was the carrier from Ripplemouth to Barnstaple....