Development of the Digestive Canal of the American Alligator 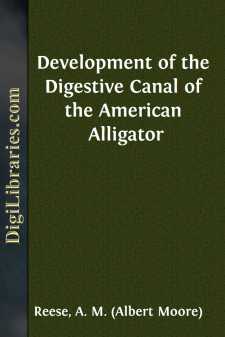 DEVELOPMENT OF THE DIGESTIVE CANAL OF THE AMERICAN ALLIGATOR By ALBERT M. REESE Professor of Zoology, West Virginia University

In a previous paper () the writer described the general features in the development of the American Alligator; and in other papers special features were taken up in more detail.

The material upon which this work was done is the same as that used for the preceding researches. It was collected by the author in central Florida and southern Georgia by means of a grant from the Smithsonian Institution, for which assistance acknowledgment is herewith gratefully made.

Various methods of fixation were employed in preserving the material. In practically all cases the embryos were stained in toto with Borax Carmine and on the slide with Lyon's Blue. Transverse, sagittal, and horizontal sections were cut, their thickness varying from five to thirty microns, depending upon the size of the embryos.

The first indication of the formation of the enteron is seen in the very early embryo shown, from the dorsal aspect, in . The medullary folds and notochord are evident at this stage, but no mesoblastic somites are to be seen.

A sagittal section of approximately this stage, shown in , represents the foregut, fg, as a shallow enclosure of the anterior region of the entoderm, while the wide blastopore, blp, connects the region of the hindgut with the exterior. No sign of a tail fold being present, there is, of course, no real hindgut. The entoderm, which has the appearance of being thickened because of the fact that the notochord has not yet completely separated from it, is continuous, through the blastopore, with the ectoderm. Posterior to the blastopore the primitive streak, ps, is seen as a collection of scattered cells between the ectoderm and the entoderm, apparently formed by proliferation from the ventral side of the ectoderm.

A slightly later stage is shown in , a dorsal view of an embryo with five pairs of mesoblastic somites. A sagittal section of this stage is shown in . The foregut is here more inclosed, and the notochord, nt, having separated from the entoderm, en, is seen as a distinct layer of cells extending from the foregut to the blastopore.

A transverse section through the headfold of this stage is shown in . The foregut is seen as a wide cavity, ent, depressed dorsally, apparently, by the formation of the medullary groove and the notochord; it is wider laterally than in a dorso-ventral direction, and its walls are made up of about three layers of closely arranged, irregular cells; the wall is somewhat thinner on the dorsal side, just below the notochord....