Determining the Age of Cattle by the Teeth 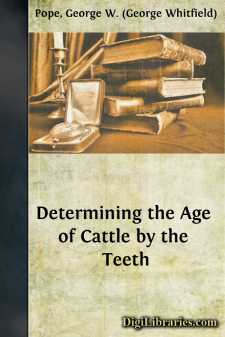 DETERMINING THE AGE OF CATTLE BY THE TEETH.

The age of cattle can be approximated closely by the appearance, development, and subsequent wear of their second incisor teeth. Cattle have eight incisor teeth, all in the lower jaw. In the calf at birth two or more of the temporary or first incisor teeth are present. With the first month the entire eight incisors have appeared.

Fig. 1.—Internal face of incisors of the calf.

As the animal approaches 2 years of age the center pair of temporary incisor teeth or pinchers are replaced by the permanent pinchers which at 2 years attain full development.

At from 2½ to 3 years the permanent first intermediates are cut and are usually fully developed at 3 years.

At 3½ years the second intermediates or laterals are cut. They are on a level with the first intermediates and begin to wear at 4 years.

At 4½ to 5 years the corner teeth are replaced, the animal at 5 years having the full complement of incisors with the corners fully developed.

At 5 to 6 years there is a leveling of the permanent pinchers, the pinchers usually being leveled at six and both pairs of intermediates partially leveled and the corner incisors showing wear.

From seven to eight the pinchers are noticeably worn; from eight to nine the middle pairs, and by ten years the corner teeth.

After 6 years the arch gradually loses its rounded contour and becomes nearly straight by the twelfth year. In the meantime the teeth have gradually become triangular in shape, distinctly separated, and show the progressive wearing to stubs.