Desk and Debit or, The Catastrophes of a Clerk 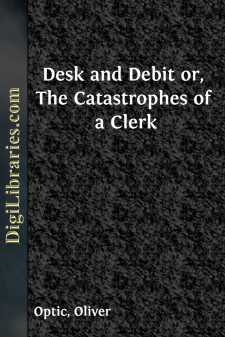 IN WHICH PHIL HAS A TALK WITH HIS FATHER, AND REVIEWS HIS PAST HISTORY.

"I must go to Chicago, father," said I, one evening, after we had been discussing our domestic relations with more than usual earnestness.

"Why go to Chicago, Philip? What put that idea into your head?" replied my father, with a kind of deprecatory smile.

"I don't feel as though I could live any longer in this state of doubt and uncertainty."

"Really, Philip, I don't think you need worry yourself to that extent."

"I can't help it. I want to know whether my mother is alive or dead. She may have been in her grave for a year for aught we know."

"Not so bad as that, Philip. I am sure if anything had happened to her, we should have heard of it," added my father, mildly; but I saw that he had more feeling on the subject than he chose to manifest.

"It seems to me inhuman and unnatural to live in this way," I persisted, perhaps a little more impatiently than I ought to have spoken.

"Don't compel me to review the bitter experience of the past. You know it all."

"Certainly it is not your mother's fault that an ocean rolls between her and me."

"I am willing to allow that it is your fault, and mine too, in a sense different from what you meant, that our family is still separated."

I perceived that my father was considerably affected by what I had said; and as he relapsed into silence, apparently to give vent to the emotions which disturbed him, I did not press the subject any further at that moment. But I felt all that I had said, and I thought something ought to be done. I was thoroughly in earnest, and I felt that it would be my fault if our little family continued to be separated for a much longer period.

I was nearly sixteen years old; and into that brief space had been crowded a strange and varied experience. In order that my readers may know precisely my relations to the rest of the world, and understand why I was so deeply moved, I must briefly review the events of my life. I was born in the city of St. Louis, though this was a fact which had been patent to me only a couple of years. I had attained unto that worldly wisdom which enabled me to know who my father was; but I was less fortunate in regard to my mother, whom I could not remember that I had ever seen, though it was a comfort for me to know that my baby eyes had gazed into her loving face.

In the burning of the steamer Farringford, on the upper Missouri, in which my father and mother and myself—then a child two years old—were passengers, I had been committed to a raft formed of a state-room door, and bolstered with pillows to keep me from rolling off. By an accident this frail craft was carried away from the burning steamer, then aground, and I was separated from my father, who, I grieve to say, was intoxicated at the time, and unable to do all that he would have accomplished in his sober senses. At this moment the steamer broke from the shore, and was carried swiftly down the mighty river....