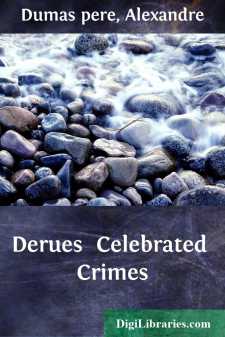 One September afternoon in 1751, towards half-past five, about a score of small boys, chattering, pushing, and tumbling over one another like a covey of partridges, issued from one of the religious schools of Chartres. The joy of the little troop just escaped from a long and wearisome captivity was doubly great: a slight accident to one of the teachers had caused the class to be dismissed half an hour earlier than usual, and in consequence of the extra work thrown on the teaching staff the brother whose duty it was to see all the scholars safe home was compelled to omit that part of his daily task. Therefore not only thirty or forty minutes were stolen from work, but there was also unexpected, uncontrolled liberty, free from the surveillance of that black-cassocked overseer who kept order in their ranks. Thirty minutes! at that age it is a century, of laughter and prospective games! Each had promised solemnly, under pain of severe punishment, to return straight to his paternal nest without delay, but the air was so fresh and pure, the country smiled all around! The school, or preferably the cage, which had just opened, lay at the extreme edge of one of the suburbs, and it only required a few steps to slip under a cluster of trees by a sparkling brook beyond which rose undulating ground, breaking the monotony of a vast and fertile plain. Was it possible to be obedient, to refrain from the desire to spread one's wings? The scent of the meadows mounted to the heads of the steadiest among them, and intoxicated even the most timid. It was resolved to betray the confidence of the reverend fathers, even at the risk of disgrace and punishment next morning, supposing the escapade were discovered.

A flock of sparrows suddenly released from a cage could not have flown more wildly into the little wood. They were all about the same age, the eldest might be nine. They flung off coats and waistcoats, and the grass became strewn with baskets, copy-books, dictionaries, and catechisms. While the crowd of fair-haired heads, of fresh and smiling faces, noisily consulted as to which game should be chosen, a boy who had taken no part in the general gaiety, and who had been carried away by the rush without being able to escape sooner, glided slyly away among the trees, and, thinking himself unseen, was beating a hasty retreat, when one of his comrades cried out—

"Antoine is running away!"

Two of the best runners immediately started in pursuit, and the fugitive, notwithstanding his start, was speedily overtaken, seized by his collar, and brought back as a deserter.

"Where were you going?" the others demanded.

"Home to my cousins," replied the boy; "there is no harm in that."

"You canting sneak!" said another boy, putting his fist under the captive's chin; "you were going to the master to tell of us."

"Indeed!—only this morning you pretended I had taken a book you had lost, and you did it because I kicked you yesterday, and you didn't dare to kick me back again."

Antoine lifted his eyes to heaven, and folding his arms on his breast—

"Dear Buttel," he said, "you are mistaken; I have always been taught to forgive injuries."

"Listen, listen! he might be saying his prayers!" cried the other boys; and a volley of offensive epithets, enforced by cuffs, was hurled at the culprit.

Pierre Buttel, whose influence was great, put a stop to this onslaught.

"Look here, Antoine, you are a bad lot, that we all know; you are a sneak and a hypocrite. It's time we put a stop to it. Take off your coat and fight it out. If you like, we will fight every morning and evening till the end of the month."

The proposition was loudly applauded, and Pierre, turning up his sleeves as far as his elbows, prepared to suit actions to words.

The challenger assuredly did not realise the full meaning, of his words; had he done so, this chivalrous defiance would simply have been an act of cowardice on his part, for there could be no doubt as to the victor in such a conflict. The one was a boy of alert and gallant bearing, strong upon his legs, supple and muscular, a vigorous man in embryo; while the other, not quite so old, small, thin, of a sickly leaden complexion, seemed as if he might be blown away by a strong puff of wind. His skinny arms and legs hung on to his body like the claws of a spider, his fair hair inclined to red, his white skin appeared nearly bloodless, and the consciousness of weakness made him timid, and gave a shifty, uneasy look to his eyes. His whole expression was uncertain, and looking only at his face it was difficult at first sight to decide to which sex he belonged. This confusion of two natures, this indefinable mixture of feminine weakness without grace, and of abortive boyhood, seemed to stamp him as something exceptional, unclassable, and once observed, it was difficult to take one's eyes from him....