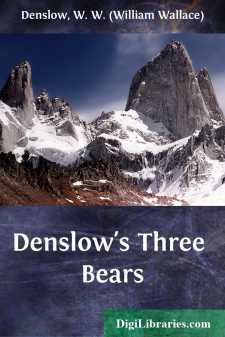 long time ago in a cottage on the edge of a great forest there dwelt a little girl by the name of Golden Hair; she was an orphan and lived with her grandmother who loved her dearly. The grandmother was very old and so most of the house work was done by Golden Hair; but she was so young and strong she did not mind that a bit, for she had plenty of time to play and was merry the whole day long.

Although little Golden Hair lived far from other children she was never lonesome, for she had many friends and playmates in the wild creatures of the wood. The gentle, soft eyed deer would feed from her hand, and the wild birds would come at her musical call; for she knew their language and loved them well.

Golden Hair had never wandered far into the forest. But one day in the early autumn time, as she was gathering bright leaves and golden rod, she strayed farther than she knew and came upon a lonely, gray cabin under the mighty trees. A slab of wood beside the half open door told who lived within. It read:

"So this is where the jolly bears live!" said Golden Hair, as she knocked upon the door. "I want to meet them."

No answer came to her knocking, so she pushed the door wide open and walked in.

It was a most disorderly house, but a bright fire burned on the hearth, over which hung a big, black kettle of bubbling soup, while on the table, near by, were three yellow bowls of different sizes.

"A big bowl for Papa Bear, a medium sized bowl for Mamma Bear, and a little bowl for the Tiny Bear," said Golden Hair.

"That soup smells good," she went on to say, "but my! what an untidy house! I'll put the place to rights while I am

open eyes, staring at Golden Hair, who stood, like a ray of sunshine in the dusky room; then they burst into loud laughter and made her welcome to their home. When they saw how nice and clean it was they thanked her heartily and invited her to share their dinner, for the soup was now ready and they were all

this shaggy company with her little Golden Hair; but when she saw how jolly they all were and how handy they were in helping Golden Hair get the supper, she was delighted to have them stay, and gave them welcome. Papa Bear split the wood, brought it in, and built the fire; Mamma Bear got the tea kettle and filled it with water that was carried from the well by the Tiny Bear, and soon they were able to sit down

pumpkin pie, with tea for the elders and nice sweet milk for Golden Hair and the Tiny Bear.

The grandmother liked the three bears so well and the bears were so delighted with the comforts of home that they all decided to live together for the general good.

three beds to the home of Golden Hair and her grandmother, the very next day; and from all accounts they were happy ever after....