Dennison Grant: a Novel of To-day 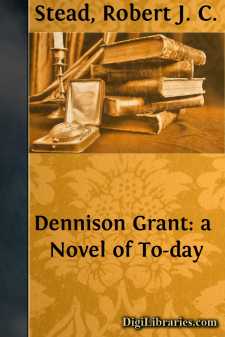 "Chuck at the Y.D. to-night, and a bed under the shingles," shouted Transley, waving to the procession to be off.

Linder, foreman and head teamster, straightened up from the half load of new hay in which he had been awaiting the final word, tightened the lines, made an unique sound in his throat, and the horses pressed their shoulders into the collars. Linder glanced back to see each wagon or implement take up the slack with a jerk like the cars of a freight train; the cushioned rumble of wagon wheels on the soft earth, and the noisy chatter of the steel teeth of the hay-rakes came up from the rear. Transley's "outfit" was under way.

Transley was a contractor; a master of men and of circumstances. Six weeks before, the suspension of a grading order had left him high and dry, with a dozen men and as many teams on his hands and hired for the season. Transley galloped all that night into the foothills; when he returned next evening he had a contract with the Y.D. to cut all the hay from the ranch buildings to The Forks. By some deft touch of those financial strings on which he was one day to become so skilled a player Transley converted his dump scrapers into mowing machines, and three days later his outfit was at work in the upper reaches of the Y.D.

The contract had been decidedly profitable. Not an hour of broken weather had interrupted the operations, and to-day, with two thousand tons of hay in stack, Transley was moving down to the headquarters of the Y.D. The trail lay along a broad valley, warded on either side by ranges of foothills; hills which in any other country would have been dignified by the name of mountains. From their summits the grey-green up-tilted limestone protruded, whipped clean of soil by the chinooks of centuries. Here and there on their northern slopes hung a beard of scrub timber; sharp gulleys cut into their fastnesses to bring down the turbulent waters of their snows.

Some miles to the left of the trail lay the bed of the Y.D., fringed with poplar and cottonwood and occasional dark green splashes of spruce. Beyond the bed of the Y.D., beyond the foothills that looked down upon it, hung the mountains themselves, their giant crests pitched like mighty tents drowsing placidly between earth and heaven. Now their four o'clock veil of blue-purple mist lay filmed about their shoulders, but later they would stand out in bold silhouette cutting into the twilight sky. Everywhere was the soft smell of new-mown hay; everywhere the silences of the eternal, broken only by the muffled noises of Transley's outfit trailing down to the Y.D.

Linder, foreman and head teamster, cushioned his shoulders against his half load of hay and contemplated the scene with amiable satisfaction. The hay fields of the foothills had been a pleasant change from the railway grades of the plains below. Men and horses had fattened and grown content, and the foreman had reason to know that Transley's bank account had profited by the sudden shift in his operations....